During Google's annual Google I/O event, it explained the newest version of Android: version 12. Android becomes a lot more personal, secure and works better with others.

Every year Google previews the newest version of Android during its Google I/O event. And this year is no different. Android 12 focusses on these three things:

Android 12 is getting a new design language called 'Material You'. It follows 'Material Design' and is considered a personalized version of it. This goes beyond themes, you can choose colors, shapes and animations. Material You is coming first to Pixel phones in the fall of 2021 and later to other Android products.

Android becomes a lot more personal with Material You. That's a good thing because there are now 3 billion active Android devices. Material You is the biggest design change in years. There are not only new colors, there are new shapes with lots of animations. This makes Android 12 feel a lot more natural and personal.

There are new privacy features coming to Android 12 that we've seen before in iOS. When an app uses the microphone or camera, an indicator will be shown. Don't want apps to use the microphone at all? There is toggle available in Quick Settings to disable the microphone completely.

In terms of privacy, there are also some improvements. You can delete the search results of the past 15 minutes. Ideal for when you want to keep something 'secret' without deleting your entire search history. Also new is Locked Folders in Photos. This feature already existed on newer Pixel phones but is now coming to other Android phones as well. It's a secret folder in Photos where you can keep photos that are only shown after entering your fingerprint or password.

Some improvements were also announced for the popular Google Maps. Improvements aimed at reducing emissions. Google was already working on that by adding 150,000 miles of bike paths. If you prefer to go by car, there are now 'Eco-friendly routes' and 'Safer routing'. Eco-friendly routing combines traffic density, distance and road surface quality to calculate the most efficient route that uses the least amount of fuel. And Safer routing uses artificial intelligence to calculate a route based on the best road and traffic conditions. 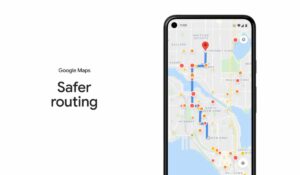 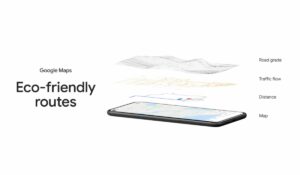 The first beta of Android 12 is available today for a number of phones from Asus, OnePlus, Oppo and TCL. Of course, you can also install the beta on your Pixel phone including a Pixel 5. This beta still contains bugs and errors so think carefully before you install it. Android 12 won't officially be released until the fall.