According to tweets from @IceUniverse, the Galaxy S23 series promises to be a minor update. Read more

Google shows off the Pixel Watch up close in this video. We didn't see it this good beforeprevious week

Just before LG discontinued phones, it was working on a roll-up smartphone. Someone has now borrowed it and made this video of itprevious week

Without mentioning it, Apple has significantly changed the design of the iPhone 14, making it better repairable. Read more

Samsung seems to have finished the Galaxy S23+. We think so because a picture showing its battery has appeared. And if the battery is final, the rest of the device is likely final too. Read more

The first disassembly of an Apple iPhone 14 model is in, specifically of the iPhone 14 Pro Max. Get an inside look at the Dynamic Island15 september

Apple has equipped the new Watch Series 8 with a temperature sensor. Read more

The first renders of the OnePlus 11 Pro have surfaced. These renders show a vast and round camera module with the Hasselblad logo. But we also see an old acquaintance. Read more

For some time now we have been talking about Samsung's upcoming Galaxy S23 Ultra and its 200MP camera. Read more

You hope never to experience one but the Apple iPhone 14 Pro features crash detection. And if it recognizes that you've been in a serious car accident it will call the emergency number for you9 september

Same design but now available in two sizes; the new Apple iPhone 14 and iPhone 14 Plus7 september

According to Benjamin Braun, Chief Marketing Officer of Samsung Europe, the shipment of the foldable Galaxy Z has doubled compared to last year. Read more

With so many moving parts, you would think that the Samsung Galaxy Z Fold 4 would be very fragile. Yet nothing could be further from the truth, as @ZacksJerryRig tests out1 september

On the face of it, the Flip4 seems like a minor update, yet Samsung has major hopes for the device. Read more

Press renders of the upcoming edge 30 Neo have surfaced by known leaker Evan Blass, better known to some as @evleaks. We see an entry-level device in four colors that was initially known by another name. Read more

How to get the most out of your Google Pixel 6 Pro's battery? With Adaptive Battery as explained here26 august

There is quite a bit involved in making a foldable like the Samsung Galaxy Z Fold 4. It has to be assembled of course, but also tested. This video gives you an insight into the process.26 august

We have news for those who had their eyes set on the Samsung Galaxy S23 Ultra. Read more

This is pretty unusual by Apple standards. A video of a not-yet official product. Read more 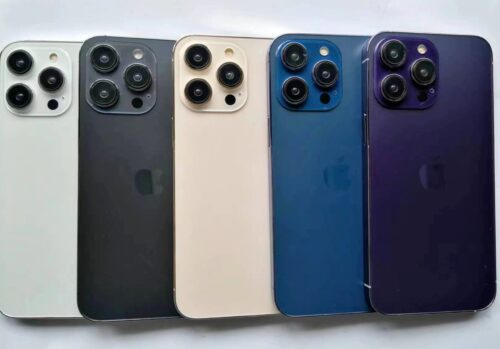 Will these be the new colors of the Apple iPhone 14 Pro Max? At least they are vibrant // via @heyitsyogesh25 august

Samsung has announced a new smartphone at the bottom of its lineup. Read more

Apple has sent out invitations for an in-person event. Read more

They still haven't been officially announced, but in this video from Unbox Therapy we do get to see the Google Pixel 7 and Pixel 7 Pro. In other words; just a little more patience22 august

It's time to test how sturdy and robust the Google Pixel 6a is. Do you get a somewhat sturdy phone for little money? Zack Nelson found out20 august

Several sources have independently named a date when Apple may announce the iPhone 14 series. Read more

Useful tips to save data