It seems that we have the first real life photos of the Galaxy S22 Ultra with its new camera design on the back. And it immediately puts an end to the discussion of what that new camera will look like. Samsung is opting for LG's teardrop design.

The photos were published by Jon Prosser of Front Page Tech. We see a Note-like phone that is supposed to represent the S22 Ultra. At least the design matches previously surfaced CAD drawings. 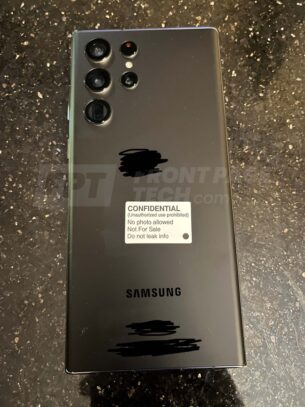 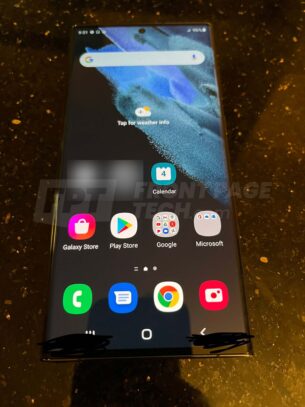 Slightly sloped screen edges and room for an S Pen at the bottom. However, it is the back that catches most of our attention. There are 4 cameras with an extra round cutout for what looks like several sensors. The placement of the various cameras looks a lot like the LG Velvet. Despite the hopelessly optimistic sticker that reads "Confidential, no photos allowed, not for sale and do not leak info," someone did anyway and passed pictures to Jon.

The camera reportedly consists of a 108MP main camera, 12MP ultra wide angle, 10MP 3x telephoto and 10MP 10x telephoto. The latter is presumably the periscope camera that can be seen at the bottom left. The likely reason why Samsung doesn't use the same Contour Cut Camera design as other recent Galaxy phones is to keep the weight down. The Galaxy S22 Ultra will be a big phone and then weight is always something to keep a close eye on.

In another tweet, Jon reports that Samsung will announce the Galaxy S22 series during an Unpacked Event on February 8. Samsung will start taking preorders from that date, after which the phones will be available on February 18th. Whether this is actually the case remains to be seen. Samsung has yet to announce an event.