Together with the previously reviewed Nexus 6P, Google also presented the Nexus 5X. This also runs on Android 6.0 Marshmallow but has a 5.2 inch screen and plastic housing.

With the Nexus 5X there is finally another Nexus available with a smaller screen size and after two years possibly a worthy successor to the Nexus 5. The Nexus 5 offered a lot of value for money and with the more expensive Nexus 6 that had changed a bit. Also with the Nexus 6P and 5X there was a lot of criticism about the high introduction price. Especially for the smaller Nexus 5X made of plastic the price seemed disproportionate. Meanwhile, the price for the cheapest variant has dropped below 400 euros. That makes it a lot more interesting to subject this device to a closer inspection.

Part of the criticism on the introductory price came from the fact that there are many capable Android devices available in the segment between 300 and 400 euros. Think for example of the Motorola Moto X Play, Sony Xperia Z3+, Huawei P8, Honor 7, OnePlus 2 and the new Samsung Galaxy A5. Of these devices, Motorola and OnePlus are the closest to the pure Android user experience on the Nexus.

We have tested the black version of the Nexus 5X with 16 GB storage. All versions are black on the front with a plate of Gorilla Glass 3 covering the entire front. Above and below the screen there are two grids of which only a speaker is hidden behind the lower one. A notification light is also hidden in the middle of these. Part of the sound of the loudspeaker also comes from the USB-C connection. 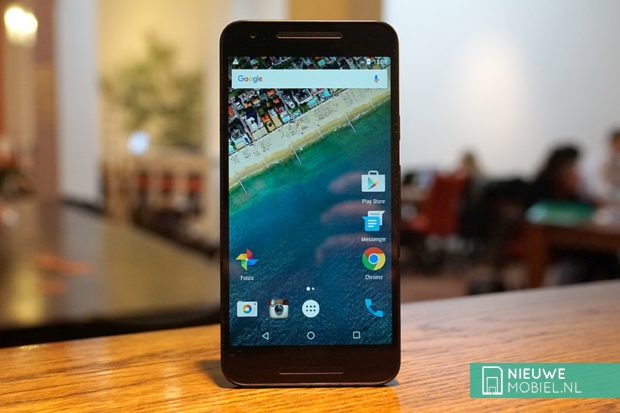 For a device with a 5.2 inch screen, the NEXUS 5X is on the big side. This is also shown by the screen-to-body ratio of 70.4%. This is mainly due to the space above and below the screen. The device is still easy to handle, but you can feel it more clearly in your pocket.

Around the glass and the sides is a black, hard plastic edge. On the right side are the on/off and volume buttons. Also shrouded in black plastic. On the left is the sledge for the SIM card. The top of the device is empty and at the bottom the USB-C cable and headset can be connected. 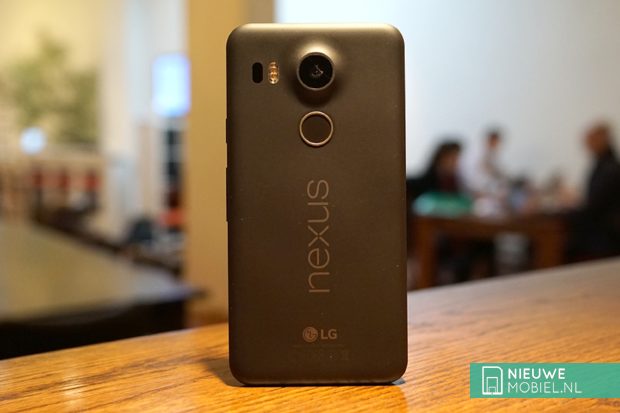 The back of the device has a slight bulge and a kind of rubber-like coating. It is a little sensitive to fingerprints, but this makes it very comfortable to hold and gives a good grip. On the back of the device are the only striking aspects of the Nexus 5X. Starting with a small bulge in front of the camera. Underneath this is the fingerprint scanner with a light grey border around it.

Despite the use of plastic, there is little to be said for the build quality of the appliance. Although it is nice and light, it still feels very solid and does not suffer from cracks or crevices. The only flaw we encountered was that suddenly there was a crack in the glass in front of the camera. LG clearly did not use sapphire glass here. Strange is that we don't know when this happened, he didn't fall for example. Maybe it has to do with the fact that the camera really rests on the bulge when it is on the table.

The battery of the Nexus 5X has a capacity of 2,700 mAh. That's not noticeable and there are quite a few devices with larger batteries. So we were a bit uncertain about the performance of the Nexus 5X in this area beforehand. In the end, we got an average of four to five hours screen-to-screen time out of it with a 24 hour usage time. We had set up two email accounts and mainly used WhatsApp, social media and news apps. At a screen-to-screen time of around six hours, the Nexus 5X will generally need to be connected to the charger after about 20 hours. This is similar to the Nexus 6P but there are certainly devices that do better. The 5X charges pretty quickly with the included quick charger. In less than 1.5 hours it's back up to 100% but shorter charging times also give a significant boost. 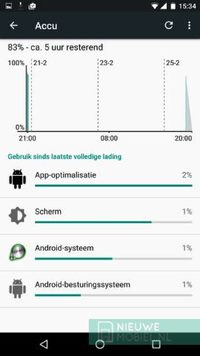 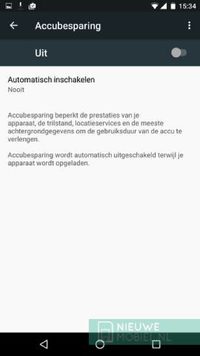 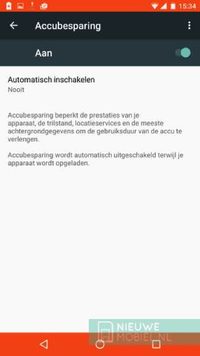 Doze', the new power saving feature of Android 6.0, also works well on the Nexus 5X, but only works really well at night. The device should lie flat and not be used for a while. Android also has a battery saving function that you can turn on manually or automatically at 15 or 5 percent remaining battery percentage. This limits the performance of the device, the vibration function and most background data. The function can be found by pressing the three dots at the top right of the screen in the battery overview. 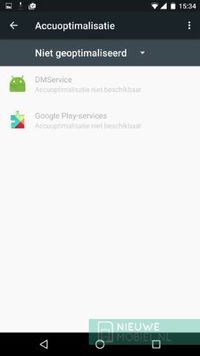 The Nexus 5X has a slightly less powerful processor than the Nexus 6P and 'only' 2 GB of working memory. Still, it's hardly inferior to its big brother in terms of performance. Android 6.0 runs remarkably smoothly on the device. There are no noticeable hiccups during daily use or watching movies. The software is well optimized for the hardware. It's possible that after a longer period of use there will be some delay if you put it next to the Nexus 6P.

The screen of the Nexus 5X has a Full HD resolution of 1920 × 1080 pixels, giving a pixel density of 424 PPI. While the Nexus 6P received an AMOLED panel from Huawei, LG applies an IPS LCD screen to the 5X. This ensures that colours stand out less and look slightly more realistic. Furthermore, the viewing angles are very good and detail reproduction is more than sufficient. For the screen, only the brightness can be adjusted. Sometimes the automatic brightness was on the dark side. 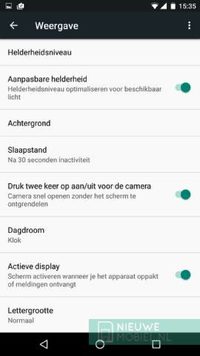 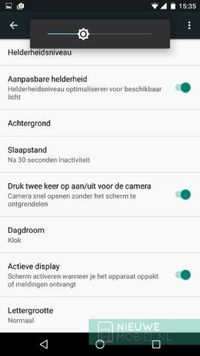 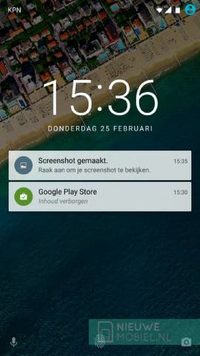 Of course the Nexus 5X runs on a pure version of Android 6.0. One of the most important innovations in this Android version is that app permissions no longer have to be approved all at once before downloading the app, but only when an app needs it. This does, however, sometimes cause pop-ups to appear asking if you want to allow an application to use a feature. 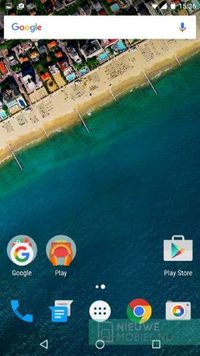 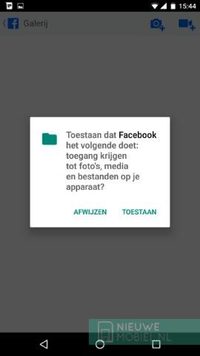 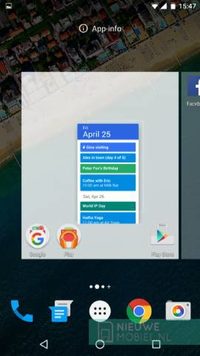 Furthermore, you still have up to five start screens at your disposal, most of which are on the left. Another swipe to the left again next to that we'll find Google Now with lots of updates on separate maps that might be of interest to you. Another way to open Google Now is to press and hold the home key. Shortcuts and widgets can be placed on the start screens in a 5x5 grid. 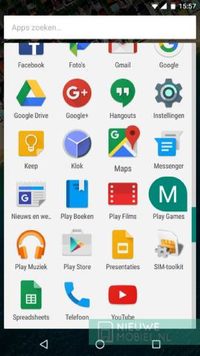 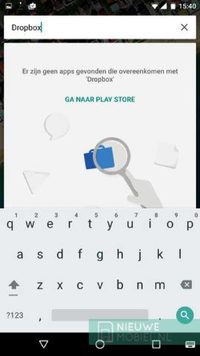 The launcher, from which you can open apps, has recently changed slightly but is now a separate application that can be updated from the Play Store. The application menu no longer has separate pages and can now be scrolled vertically. There is also a search bar at the top with a line for the four most commonly used apps. This line can also be turned off in the Google settings. 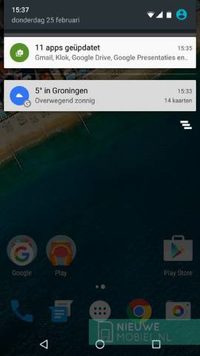 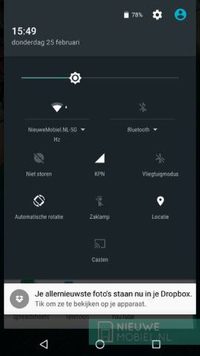 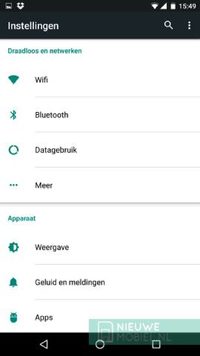 The screen with shortcuts to settings such as WiFi and Bluetooth, as well as a flashlight, is located above the notification window. This means that notifications still appear by dragging the status bar down but to get to the settings you have to repeat this movement again or swipe down with two fingers at the same time. The lock screen also shows notifications. You can wipe these down or open the corresponding app directly by tapping it twice. You can also quickly open a voice search or the camera from the lock screen. 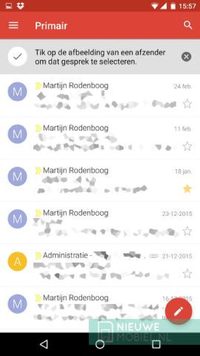 Gmail is the only email application on Nexus devices today. That's because Gmail can synchronize with other email accounts in addition to your Google account. Like Yahoo, Outlook or Exchange. Mail from different accounts can be displayed in a combined mailbox. As with Gmail, messages from POP3, IMAP, and Exchange accounts can be grouped as conversations. We once had trouble synchronizing and sending via our Outlook.com account. After we rebooted the device this was fixed. 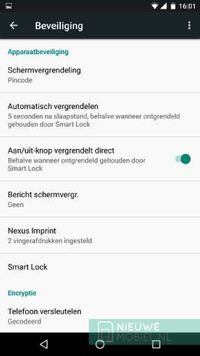 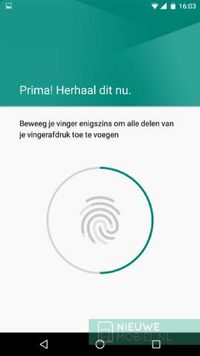 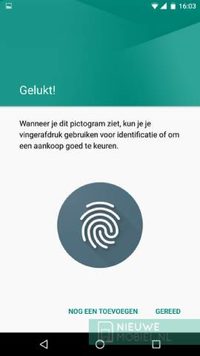 The new USB Type-C connection is easier to use because you don't have to fiddle around as much to plug it in the right way, but the technology is so new that there are some drawbacks too. The supplied cable has a Type C connection at both ends. So all your USB adapters for the socket are also unusable. Moreover, unlike the 6P, the Nexus 5X does not come with an extra cable with a regular USB-A plug to connect the device to the computer. If you want to transfer files, you'll need to buy an extra cable or do everything via the cloud.

The camera is also the same as on the 6P and therefore has laser-assisted autofocus. Of the 12.3 megapixels, only 12.2 can be used in a 4:3 ratio. These pixels are relatively large, which means that they capture a lot of light. The camera can be started quickly by pressing the power button twice. This also works when the camera is in use, but then it locks. 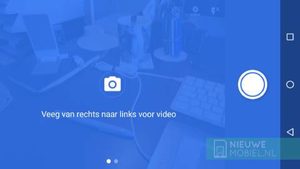 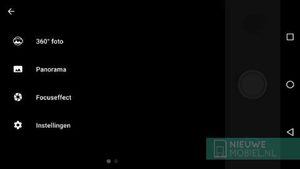 Then a very clear interface appears, although it is a bit minimalistic in terms of options. Next to the record button is a switch for the camera at the front and a shortcut to your photos. In the upper right corner you can set the timer, HDR+ and flash. Via the three dashes in the upper left corner, 360° photo, panorama and focus effect can be started. Under settings, resolution and quality, location and grid can be adjusted. Switching between photo and video is done by swiping left or right across the screen. Video can be recorded in up to 4K resolution and slow motion at 120 frames per second. 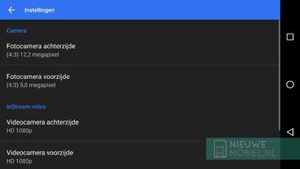 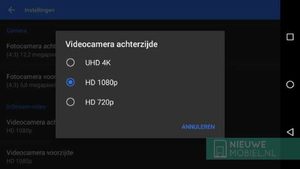 Despite the limited setting options, the camera delivers good results and is very easy to use in practice. Because the camera also starts up quickly, you hardly lose any time. The camera performs very well across the board. Color reproduction and exposure come out well and detail reproduction is very neat. This certainly also applies to darker situations, where there is no noise. We have therefore rarely used the flash. HDR+ is set to automatic by default and is then used quite often. This results in nice images, but taking a picture can take a bit longer and also the processing takes some time.

Click above for more pictures shot by the Google Nexus 5X

The Google Nexus 5X has once again made us realise that it's really nice when a phone can be easily operated with one hand. The appearance of the Nexus 5X is not as premium as that of its big brother, but the device is very comfortable to handle. Endurance remains a bit of a tricky issue with Nexus phones, even though you'll get through the day with the 5X.

At the time of writing, the price difference between the Nexus 5X and 6P thick 200 euros. However, the difference in memory must be taken into account. In terms of working and storage memory, the cheapest Nexus 5X is limitedly equipped. For that considerably lower price, the 5X does offer the same camera and fingerprint scanner as the 6P. The display is completely different but still very capable. Android 6.0 also works very well on the Google Nexus 5X and for the time being the updates won't be long in coming.