LG got the idea to place distinctive hardware of its high-end devices in midrange models. There is the LG X cam with a double camera and the LG X screen we tested with a second screen.

We saw this second screen first on the LG V10. This is a robust monster with a 5.7 inch Quad HD IPS screen, dual self-image camera and fingerprint scanner. The X screen has to do with a less than 5 inch screen, 13 megapixel camera, 1.2 GHz processor and 8 megapixel selfie camera.

With this approach, LG tries to give cheaper models that might not stand out among all the competition a 'unique selling point'. The competition is therefore not fierce. Think for example of the Samsung Galaxy J5 (2016) with self-flash, Motorola Moto G4, Honor 5C, HTC Desire 628 and Sony Xperia E5. Most of them cost just like the LG a few tens more than 200 Euro, but the Honor and Sony are available for just under 200 Euro. 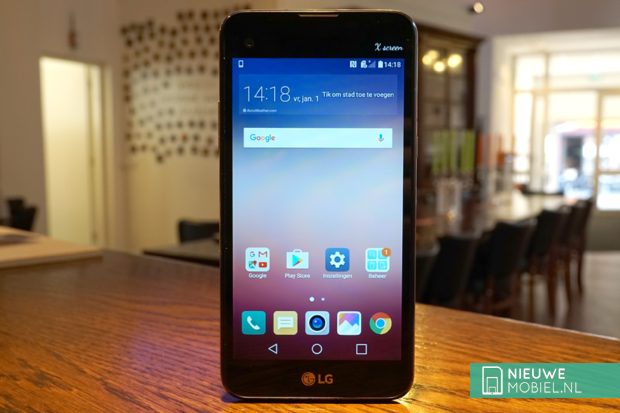 "Always-on" screen for notifications and more
8 megapixel selfie camera with face recognition
Turns standard Android 6.0 Marshmallow out of the box
.

It looks a bit like the device is inlaid all around with an aluminum strip but in reality this is a lick of paint and is just part of the one piece plastic rim around the device. So there are no ridges in the sides. The plate Gorilla Glass for the monitor and the fiberglass back are clamped in this edge.

At the top of the glass there is a small recess in the front for the ear loudspeaker and at the top left of the screen the self-image camera is visible. There is still quite a lot of empty space on either side of the screen. The screen-to-body ratio is therefore not really high at 66.5%. On top of the unit, only a small hole for a microphone is visible. The ports for headset and microUSB are at the bottom as is the speaker. The back is made of smooth fiberglass with only two holes for the camera and LED flash. This choice of material is slightly more resistant to scratches and shocks than glass. It doesn't turn out to be an empty marketing slogan; our test model didn't have a single scratch after a week of testing. 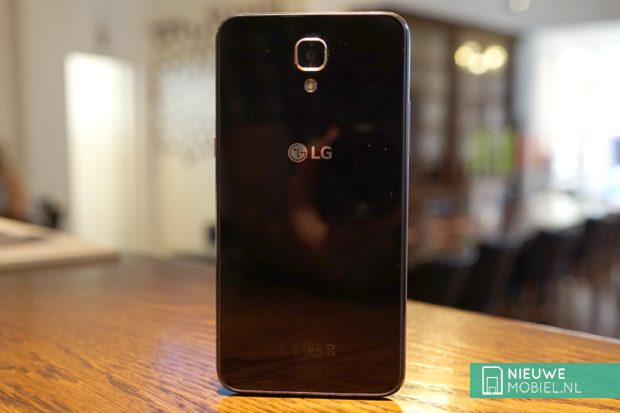 On the right side of the device is the power button and the step for SIM and microSD card. On the left side we find the volume buttons. They are in a somewhat uncomfortable place. Especially to quickly adjust the ringtone or media volume with your right hand while using the device. During a phone call they are easy to use.

The X screen feels very light but because the edge around the device is made of one piece it gives a solid impression. Moreover, this edge is slightly convex, which makes it very comfortable to handle. The front and back are quite magnets for fingerprints. Regular cleaning is the motto.

The battery of the X screen has a capacity of 2.300 mAh. According to modern standards this seems to be on the cramped side, but the hardware of the X screen doesn't seem to require too much of it, because the device can handle it quite well. With a screen on time of about four hours it is just about possible to fill the 36 hours of usage time. If you ask a bit more of the device then a full 24 hours will not be a problem. The X screen has a power saving mode that can be switched on automatically at 5% or 15% battery level. You can set whether apps should be limited in the background or block the use of the second screen. 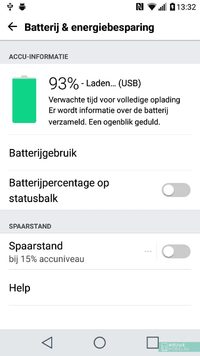 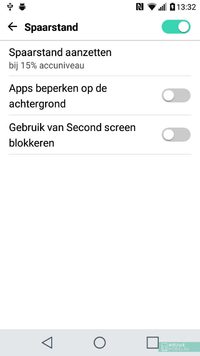 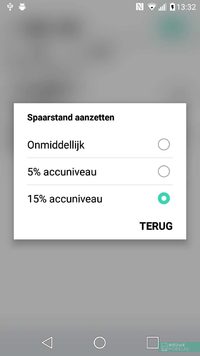 The X screen has a Quadcore 1.2 GHz processor and 2 GB of working memory. This should be sufficient for stable and smooth performance, yet it often feels slow and syrupy. Animations in the interface and opening apps are often accompanied by a slight delay.

A device with the term 'screen' in its name can be expected to have a remarkably good screen in it. The main screen of the X screen measures diagonally 4.93 inches. The HD resolution of 1280 × 720 pixels is not really generous. Fortunately, it is a good quality screen so that the detail is sufficient. Still, this resolution is not really up to date anymore. Contrast and brightness are fine but there is a bit of bluish haze on the screen and colors are very flattened and pale. 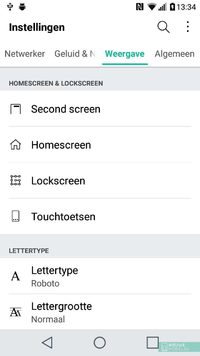 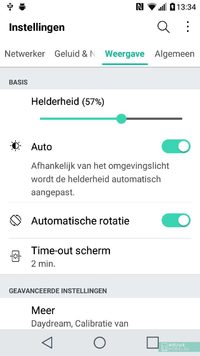 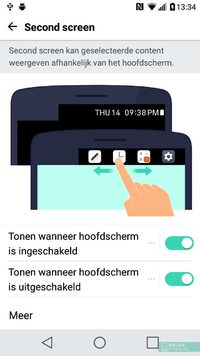 The second screen measures diagonally 1.76 inches and has a resolution of 520 × 80 pixels. This seems very lean but the screen only needs to show simple icons. The second screen is hardware one with the main screen but software is completely separate from it. On the LG V10 we weren't very satisfied with the functionality or that is still the case you can read later in this review.

The LG X screen runs on Android 6.0.1 and although Android 7.0 has now been presented, it does have the latest widely available Android version. Although you don't see much of the original Android interface because LG puts a fairly extensive shell over it. 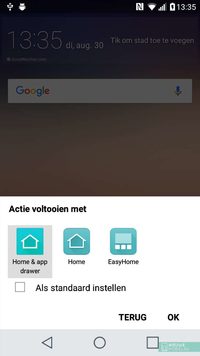 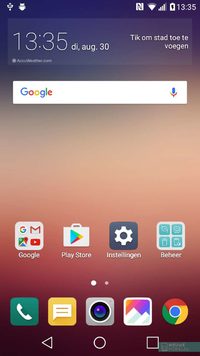 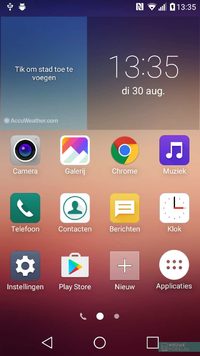 During the presentation of the LG G5 it appeared that LG had removed the application menu from the latest version of its interface. Instead, all apps could be found on the start screens, whether or not grouped in folders. This was immediately criticised and LG later left the choice up to the user via an update. This is also the case on the LG X screen and you can now choose from three launchers listening to the names Home, EasyHome and Home & app drawer under display in the settings. 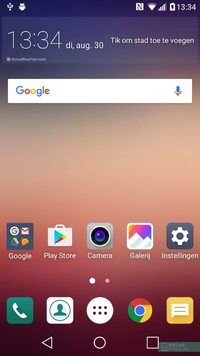 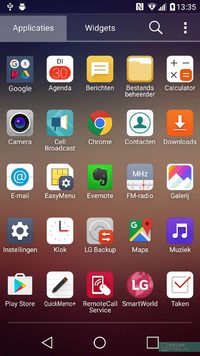 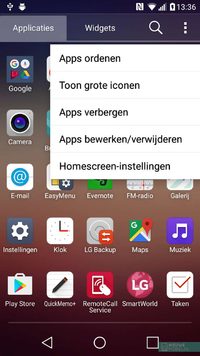 If you choose for a start screen with a separate application menu, you can adjust the arrangement of this menu yourself. The five by five grid is neat but the separate tab for widgets is really out of date. However, LG has modernized the icons of their own apps and rounded off the corners. The number of apps installed by default is manageable but you are still confronted with unsolicited additions like Evernote, RemoteCall Service and LG Smartworld. These cannot be removed. 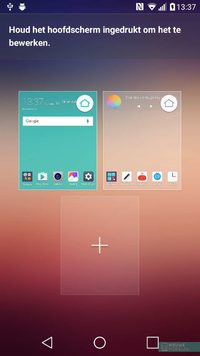 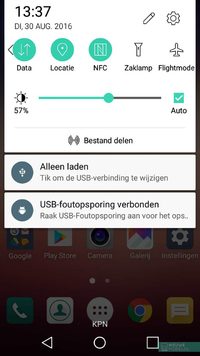 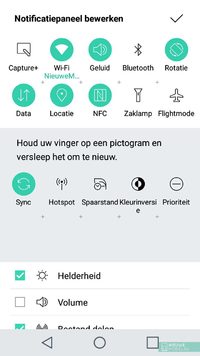 Fortunately, 'Smart Bulletin' has disappeared to the left of the start screens, but Google Now has not replaced it. To expand the number of start screens you have to zoom out by pinching with thumb and index finger on an existing start screen. The buttons for quick settings in the notification screen are now white instead of black. By pressing the pencil icon, the layout of the buttons can be changed.

The second screen may be active when the main screen is on and/or off. With the main screen off, the second screen acts as a status bar showing date, time and battery level. In addition, there is room for possible notifications. After a swipe from right to left the vibration function, WiFi, flashlight or bluetooth can be switched on. The music player can also be operated here. 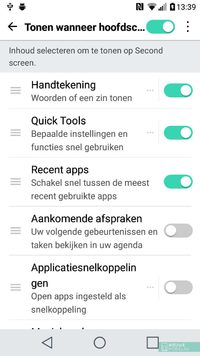 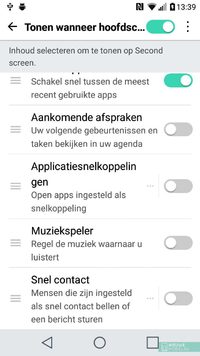 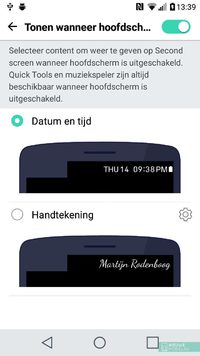 When the main screen is turned on, the second screen also shows notifications. In that case as a kind of pop-up with some more information at the moment they come in. In addition, Quick Tools, recent apps, upcoming appointments, music player controls, application shortcuts, contact shortcuts or a signature can be displayed. In addition to the four aforementioned Quick Tools, you can also choose to show a button for the camera or Capture+. Switching between the different functions is done by swiping over the second screen and the order can also be changed. 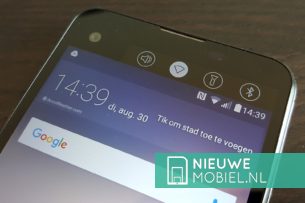 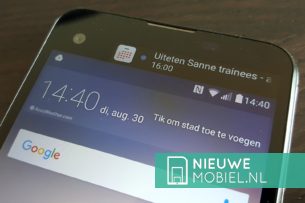 On the LG V10 we saw little added value in the second screen, partly because the main screen there is so large that you can hardly reach the second screen. As far as that is concerned, it's better on the X screen. Not all functions are equally useful. Android, for example, already has a good overview for recent apps. Shortcuts for applications or control of the music player are more practical additions. But especially the Always ON aspect of the second screen when the main screen is off is very pleasant. Also nice is that when media content is displayed fullscreen, the second screen can show time and phone status.

At the back the X screen has a, on paper, neat 13 megapixel camera. Unfortunately this one is rather limited in options and settings. There is a simple and automatic mode available. Switching between these camera modes is possible via the second screen. In the simple mode you can't set anything at all and only take a picture by tapping the screen. 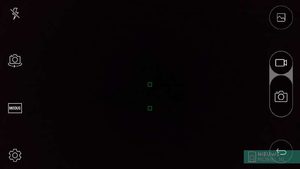 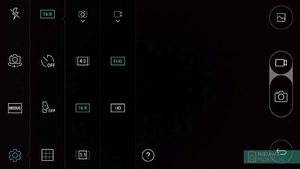 The automatic mode offers a little more possibilities but is still very scanty. The flash and panorama mode can be turned on directly in the search window. In the settings, aspect ratio and video quality, timer, voice control and grid can still be changed. That's it. A nice extra is that from the camera screen, you can share a newly taken photo directly via a large number of apps. 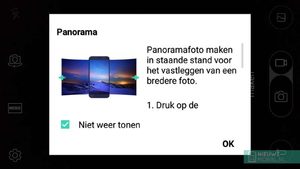 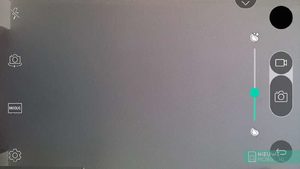 The 8 megapixel self-image camera has the same setting options and can also shoot automatically or by hand gesture. When recording video, the second screen can be used to zoom in and out.

Color and detail reproduction are generally quite successful with photos. Exposure is clearly a weak spot and due to the lack of image stabilization, a sharp picture is not always a given. It is clear that the focus in this camera is not on the camera.

As we suspected when reviewing the LG V10 a second screen is better in place in combination with a more modest main screen. When testing the X screen, we use some of the possibilities of the second screen more often than on the V10. However, we doubt whether the second screen is distinctive enough to entice people to buy the LG X screen.

Partly because his advantages are not very striking. Because of its design it lies nicely in the hand but it is not a highflier. On many other aspects in terms of hardware and performance, the X screen scores only scarcely enough to moderate. Especially the camera, speed and screen are a bit disappointing. The latter is very ironic for a device that listens to the name X screen. Certainly also because the more expensive devices of LG are known for their good screens.