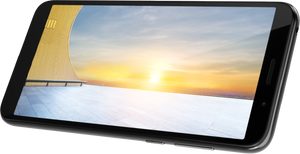 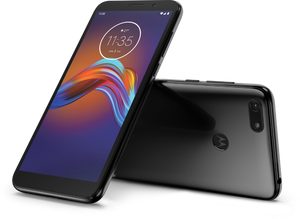 The Motorola Moto E6 Play is a playful phone with entry-level specifications. There's a fingerprint scanner in the Motorola logo on the back and there's a 13 megapixel camera with portrait mode. And all this comes with a very friendly price tag.

With the Moto E6 Play you get a relatively large Android device for little money. It's handy that despite the low price, you can unlock it with a fingerprint. There is even facial recognition available if you prefer. So you can secure your device to the maximum without having to enter a PIN code each time or, even worse, without using any form of authentication at all. The E6 Play features a fairly large 5.5 inch screen which Motorola calls a Max Vision HD+ screen. This means a screen with fairly thin screen edges with an HD+ resolution of 1440 by 720 pixels. Because of this, images look reasonably sharp, even though the pixel density does not touch the 300.

Single camera but with portrait mode

A handy feature of the Motorola Moto E6 Play is that you can expand it with both memory and a 2nd SIM card. In both cases it's a nano SIM card. With many other Dual SIM smartphones you have to choose between inserting a 2nd SIM card or a memory card. Motorola solves this problem, which is useful for those suffering from choice stress. On the back of the Play we find a 13 megapixel camera with PDAF. This is a technique to focus quickly, even in the dark. That increases the chance that you shoot a sharp picture. It is a single camera, so a separate camera with an ultra-wide-angle lens is missing. And while you often need 2 cameras to recognize depth, Motorola succeeds in distinguishing foreground from background. This allows the camera to add an out-of-focus background to your photos, giving it a portrait mode. In the foreground you will find a 5 megapixel camera which is basically enough for simple selfies and to make video calls with.

All this sounds almost too good to be true. That is why we would like to discuss the inferior aspects. For example, the storage memory of 32 GB is not large. It's expandable as mentioned before, but you can't copy a lot of apps to the memory card. 32 GB is then quickly full. Another point of attention is the processor. The built-in MediaTek MT6739 is not an extremely powerful processor. Above all, it's a simple and affordable processor that's not made for gaming. It's also a pity that you can't charge the battery quickly. Recharging takes up to 5 Watt and that means that full charging takes a few hours. What's nice is that the battery with a capacity of 3000 mAh is on the neat side.