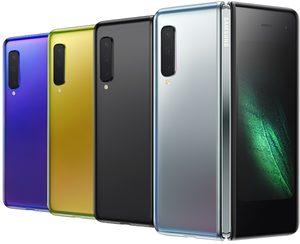 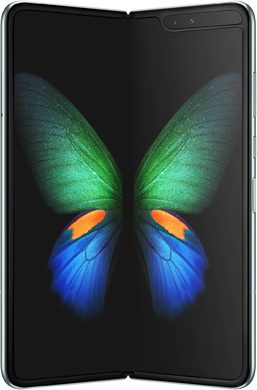 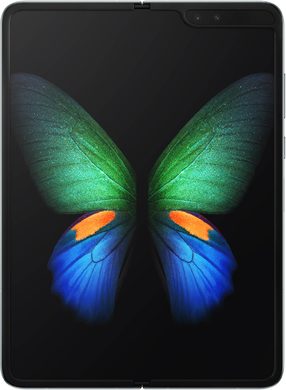 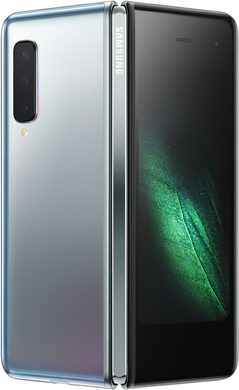 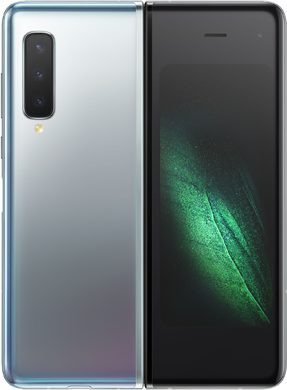 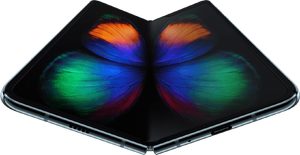 Reviews about the Samsung Galaxy Fold

Samsung Galaxy Fold in the news

The Samsung Galaxy Fold is the company's first foldable phone. The phone with its astronomically high retail price stimulates the imagination and will serve as inspiration for many generations of new phones. So it is not so much what the Galaxy Fold itself is but what it will bring us. Something we will elaborate on that in this description.

More exiting than the Galaxy Fold itself

The Samsung Galaxy Fold solves one problem; ever-increasing screen sizes in ever-smaller phones. It is a dilemma of many manufacturers: consumers want large screens to satisfy our hunger for content. And at the same time, they need to be as compact as possible to fit in our pockets and bags. First, phones went on a diet to reduce their thickness. Then the edges of the screen had to go with it. At one point we applied notches to accommodate the selfie camera. Samsung tackles this problem with the Galaxy Fold in a completely different way. And that completely different approach will be the starting point of a totally new generation of phones; the foldable one. A new era is dawning and that is perhaps more exciting than the Galaxy Fold itself.

Intuitive as a book

Samsung had to invent a lot of things to make Galaxy Fold. There are simply no other foldable phones to look away from. That ranges from the foldable screen, the hinge to the operating system. So expect a lot of uniqueness from the Fold. The device consists of two parts that open like a book. They are attached to each other via a hidden hinge that clicks once fully open. On the outside is a 4.6 inch HD+ screen where your search will start. Fold open the Fold and you continue on the same app but on a 7.3 inch QXVGA+ screen. This is a tablet size screen that fits in your pocket. We know the Dynamic AMOLED screen from the Galaxy S10 series and has an unprecedented rich color reproduction.

A new design of phones presents challenges for the Android operating system. It has to deal with situations it never had to think about before. Samsung has therefore worked with Google to make adjustments to Android to make this possible. App Continuity allows you to seamlessly switch between screens with the same app and thanks to Multi-Active Window you can open up to 3 apps at the same time.

Big and innovative 2-piece battery connected via the hinge

There is no lack of cameras on the Samsung Galaxy Fold; it counts no less than 6. On the back 3, inside 2 and on the front another 2. It does not matter how you hold the Fold; there is always one (but often multiple) camera(s) available. By the way, these are recognizable copies. The one on the back we saw earlier on the S10 and S10+, namely a 16 megapixel camera with an extra wide wide-angle lens, a 12 megapixel wide-angle lens with Dual Pixel and Dual Aperture of f/1.5 and f/2.4 and another 12 megapixel telephoto zoom lens for zooming in up to 2x. In the camera app, you can easily switch between these 3 cameras, which means that there is always the right lens available for every situation. The cameras inside are a 10 megapixel which is accompanied by an 8 megapixel RGB depth camera. This allows you to shoot portraits with blurred background, also known as bokeh. The last camera is right at the front and turns out to be the same 10 megapixel selfie camera with f/2.2 lens as the one inside.

Of course Samsung doesn't get away with average specifications. The Galaxy Fold has only the best of best features. For example, it uses the latest processor with the most processing power so far in a Galaxy phone. This 7 nanometer chipset is supported by an almost inexhaustible amount of RAM memory. That's no less than 12 GB in size. Never before have we seen so much RAM in a phone. But the storage memory of 512 GB isn't nauseous either. By the way, the lack of a memory card slot makes it impossible to expand. What is also missing is a headphone input. Never before has Samsung left it out on a Galaxy smartphone. The battery consists of two parts and is 4380 mAh in total. How long it will last will have to be proven by practical tests. What we do know is that it can be charged both wired (QC2.0 and AFC) and wireless (WPC and PMA).

The Samsung Galaxy Fold offers a glimpse into the future. The foldable phone is still in its infancy and this Fold is only version 1.0. This also automatically means that it will not yet be used to its full potential. Apps will have to be written to get the most out of it. That will take some time. It is also possible that more Android adaptations will be needed and Samsung is dependent on Google for that. Be patient with him. However, what is not so forgiving is his hefty starting price. Or rather astronomical. With a recommended retail price of 2020 euro, the Fold is not exactly cheap. Innovation has its price. However, if you consider that you get a high-end flagship phone as well as a tablet, it can still be justified somewhere. Moreover, with a copy you can say that you have a piece of history in your hands. Literally.

Video's about the Samsung Galaxy Fold

Always fun to fantasize about future phones. But if this Samsung Galaxy Z Fold 3 will ever see the light of day like this, we'll have to wait and see.

Is the Samsung Galaxy Z Fold 2 more resistant to dust? We don't want to give too much away, but in a nutshell; yes.

Now that Samsung's revised Galaxy Fold is out, it's time to test how solid it really is.

Alternatives of the Samsung Galaxy Fold