In addition to the large top-of-the-range devices, Sony has for some time now been offering more compact designs and more affordable models. One of the latest devices in this segment is the Xperia XA1.

Moreover, the XA1 is equipped with the 23 megapixel camera from Sony that we encountered earlier in much more expensive models. To be able to realise this for the price of the XA1, you would expect that other parts would have to be cut back. Still, the camera has, among other things, an 8 megapixel selfie camera, octacore processor with 3 GB working memory and is equipped with 32 GB of storage memory. However, a fingerprint sensor is missing and the screen has a 720p resolution.

This raises the question of whether the XA1 is a mediocre phone as the shell of a good camera or whether it can hold its own across the entire width. Other devices with such high camera resolution are considerably more expensive. In the same price range of the XA1 are phones like the Motorola Moto G5 Plus, Honor 6X and the Samsung Galaxy J5 2017. Does the XA1 manage to shake them off even without a fingerprint scanner?

Over the years, Sony has managed to maintain a unique look for their devices and thus distinguish itself from other manufacturers. The design of the XA1 is also somewhat unconventional. When you leave the buttons and camera out of consideration for a moment, it looks a bit like a power bank with its completely flat top and bottom from the back. 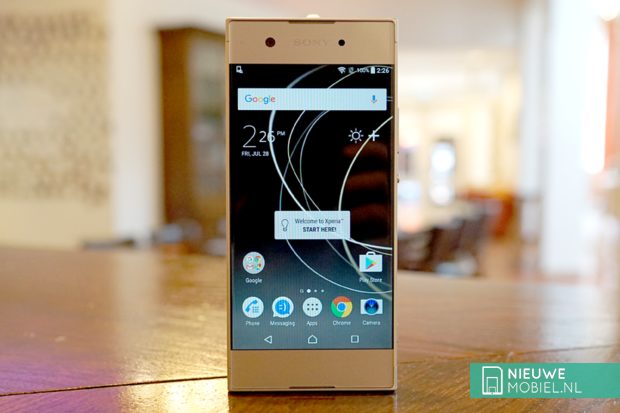 Sony also tries to follow the trend of having as little edge around the screen as possible. On the sides they succeed very well in this, because next to the screen is almost directly the outer edge of the device. However, the required space for the hardware had to be found somewhere, so there is a lot of empty space above and below the screen. A screen-to-body ratio of 70.9% is therefore not really thunderous and also a deterioration compared to its predecessor. Above the screen, the Sony logo has been placed in this space, with the self-image camera and a light sensor on both sides. A small notification light can also be seen here. Strangely enough the screen in our test model is not exactly in the middle and there is a bit more black on the left than on the right.

The glass flows almost smoothly into the sides of the appliance on both sides. At the top and bottom a rim holds it in place. Because of the two recesses in the glass at the top and bottom it looks as if the XA1 has forward facing stereo speakers, but unfortunately this is not the case. These are only for the microphone and ear loudspeaker. Instead, there is a small slot for a regular speaker at the bottom of the unit. At the bottom we also find the USB-C port and the headset can be plugged in at the top. 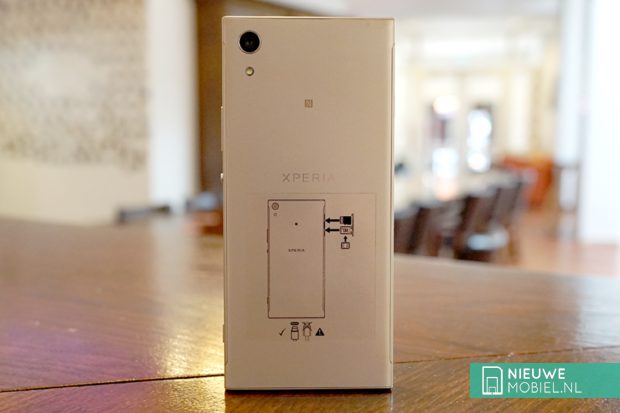 The rounded sides are largely made of metal and are slightly more copper-coloured than the rest of the aircraft. Because of its camera capabilities, the XA1 is even equipped with a specific camera button. This button is located on the right side of the camera, just like the other buttons. With an icon of a camera stamped into the metal next to it. The tray for the SIM card is on the left side and can be removed with a nail. Behind the cover there is also room for a microSD card.

The XA1 is quite narrow and therefore easy to hold with one hand, but its elongated design can cause it to slide out of a pocket rather quickly when sitting down.

The battery of the XA1 has a capacity of 2300 mAh and even though the hardware won't require too much of it, it seemed a bit on the paltry side to us. We got a maximum screen on time of seven hours from a usage time of one and a half days. That leaves room for a long day with very intensive use or two days with more moderate use. For a battery with such a capacity, we think that's pretty neat. When the remaining capacity reaches 30%, the device displays a message. This cannot be turned off.

The XA1 does not have Android's standard battery saving options, but Sony has been equipping their devices with extensive power management options, including the so-called Stamina mode, to get the most out of the battery for years. On the XA1, and probably with the arrival of Android 7.0, these options are somewhat less extensive. The regular Stamina mode limits device performance and certain features to reduce battery consumption. This can be automatically turned on at a user-selectable residual battery percentage, but the minimum level is 15%. Ultra Stamina mode minimises the number of apps and therefore the functionality of the device. The XA1 supports fast charging as well as Qnovo Adaptive Charging which ensures that the battery is not overloaded and therefore has a longer service life.

Despite the octacore processor and 3 GB of working memory, navigating on XA1 regularly feels slow. Opening apps takes quite a long time and in some apps the device responds very slowly to input. In the settings you can find a so-called smart wiper under the heading storage and memory. This function is turned on by default and according to the description it automatically optimizes storage and memory depending on the app usage. It doesn't make us much wiser. Of the storage memory, approximately 14 GB is in use by default.

The screen resolution of the XA1 hasn't been updated compared to its predecessor and is therefore stuck at 1280 × 720 pixels. This is also quite poor for a five inch screen. Details and text therefore look somewhat jagged. Brightness and color reproduction are reasonably in order. The white balance is not as coldly adjusted as we usually see with Sony.

In the settings for the screen, in addition to brightness and sleep mode, smart-backlight can also be found. This ensures that the screen stays on when you look at it and hold the device. There are also two image enhancement options. In both cases, we don't like the result of videos on YouTube. In addition, the white balance can also be changed.

The XA1 runs on Android 7.0. Although this is not the latest version, Sony is not inferior to the competition. Because Sony makes hardly any major cosmetic changes, the interface looks largely original. As a result, it requires less hardware and although it doesn't run very fast, it runs fairly smoothly.

The clock on the lock screen has been given a Sony sauce and can also be changed but otherwise the operation of the screen is the same as pure Android and messages are displayed that can be swiped out of the screen. In addition to the home screens, the screen for Google Now and the notification screen with the quick settings is virtually pure Android.

The application menu consists of pages with a grid of 5x5 that must be scrolled through horizontally. It is worthwhile to dive into the settings for the start screens so that it works exactly the way you like it best. Think for example of adding an app to a home screen or grouping icons automatically. Removing apps is a bit cumbersome because you have to open the function on apps to manage in the application menu. There's another way; just hold down an icon and release it again. You will then enter this delete mode.

When it comes to installing apps, Sony still hasn't grasped the art of omission. In addition to a collection of Sony applications such as Xperia Lounge, PlayStation and What's New, you also get third-party apps such as AVG Protection and Spotify. None of these apps can be deleted, not even Amazon Shopping or Facebook. The only option you have is to disable the apps. This deletes the data and the app disappears from the menu but is not completely off your phone.

So the XA1 has to do without a fingerprint scanner. While in this day and age and in the price range of the XA1 such a thing is quite common nowadays. That there is no place for it on the side of the device, where Sony usually places the sensor, we can understand, but the sea of space under the screen or at the back must have been an alternative.

Compared to its predecessor, the camera has made a big step forward. The XA1 is equipped with most megapixels on a camera sensor that Sony has to offer. In this case, an Exmor RS camera with 23 megapixels and a more than neat f/2.0 lens.

The camera can be activated by holding down the camera button for a moment or pressing the power button twice. This opens the superior automatic mode. By default, photos here are taken in a 16:9 aspect ratio with 20 megapixels and only a shortcut for the flash and the front camera is visible in the interface. Photos can also be taken in manual mode. In this mode, focus, shutter speed, brightness and white balance can be adjusted. HDR can also be switched on manually here.

Traditionally, Sony's camera can be expanded with extra effects. AR effect, creative effect, sound photo, panorama and timeshift burst are available as standard. In the past, it was quite easy to add effects, but nowadays you need to know what to look for in order to find them in the Play Store.

All those pixels of the shot have to load and fall into place before you can view them on the camera. The results shown afterwards can be very good, but changeability is also an appropriate description. In daylight, the white balance is fine and colours are rendered vividly but true to life. When zooming in, the image quality is not really maintained and the fine details are lost. This is probably due to the way in which the photo is processed by software. Noise is a constantly recurring phenomenon and bright spots are regularly overexposed. Close-ups are clearly a weak spot for this sensor.

Filming in 4K is not possible due to the limited hardware of the XA1. The maximum achievable video quality is 1080p resolution at 30 frames per second. The SteadyShot image stabilization ensures a smooth image. Details may fade away a little, especially in poor lighting conditions.

At the front we find an 8 megapixel camera, also of the Exmor RS type. It is equipped with a 23 millimeter wide-angle lens with a maximum aperture of f/2.0. It is more than sufficient for selfies and can also be filmed in Full HD. The AR-functions also work with the selfie camera and even special filters are available.

Sony's 23 megapixel camera sensor was once an impressive sight, but now the battle for megapixels has largely been settled in favour of quality rather than quantity. As a result, the XA1 is a bit of a stranger. Although it may be interesting that this camera is now available in a camera that costs less than 300 euros, we find the combination with less powerful hardware not entirely successful. The photos of the 23 megapixel camera can be very nice but don't really come into their own on the scanty screen of the XA1. While with smartphone photography, that is mainly the place where you get to work with your photos. Moreover, they have to load quite a long time every time.

Furthermore, only reasonable endurance speaks in his favor. Whether this outweighs the remarkable design where no room has been found for stereo speakers or a fingerprint sensor and the somewhat weak processor is perhaps purely a matter of taste.