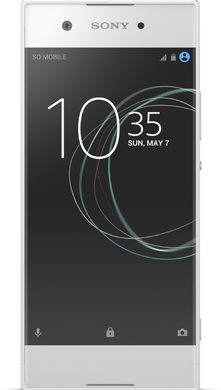 Similar with Xperia XA1 but available

Click here for more information on buying products from abroad

Reviews about the Sony Xperia XA1

In addition to the large top-of-the-range devices, Sony has for some time now been offering more compact designs and more affordable models. One of the latest devices in this segment is the Xperia XA1. Moreover, the XA1 is equipped with the 23 megapixel camera from Sony that we encountered earlier in much more expensive models. To be able to realise this for the price of the XA1, you would expect that other parts would have to be cut back. Still, the camera has, among other things, an 8 megapixel selfie camera, octacore processor with 3 GB working memory and is equipped with 32 GB of storage memory. However, a fingerprint sensor is missing and the screen has a 720p resolution.

The Sony Xperia XA1 is a not so expensive phone but still with a top camera. All this is a typical Sony housing without any noteworthy screen bezels. It not only makes it attractive, but also quite handy. Despite the fact that this is a rather nice summary of the XA1, we will go into all the functions in more detail below.

In terms of cameras, Sony is the purveyor of many other manufacturers. That is because the Sony cameras are so good. The best cameras can of course be found in the best and therefore also the most expensive Sony phones. The Xperia XA1 is a welcome exception. For a slightly more pleasant price, you still have the best camera that Sony has to offer. In this case, an Exmor RS camera of 23 megapixels and with an f/2.0 lens. This should result in sharp shots, rich in detail and sufficiently exposed even in twilight. Focusing is extra fast due to the so-called hybrid autofocus, and starting up the camera within a second is also fast. The impressive camera setup continues at the front. There we find an 8 megapixel camera, also of the Exmor RS type. Interestingly, Sony uses the same 23 millimeter wide-angle lens with a maximum aperture of f/2.0. This allows you to take photos that a whole group of people will watch out for. Even when the sun has already set or indoors, photos are still well exposed thanks to the strong lens.

Of course, all this has to be in a nice jacket. Sony has done its best on a housing with clean lines and thin screen edges. The latter means that it is not unnecessarily large. This is not that big, because the screen has a diameter of 5 inches. At the time of his announcement, that wasn't that big anymore. So assume a relatively compact phone. The screen has an HD resolution and therefore the screen is less sharp than a phone with a Full HD screen. The pixel density of the XA1 is just under 300, so you can still recognize individual pixels at close range. At normal distances, however, images are sharp and text will not appear frayed. Sony has also neatly rounded off the edges of the Xperia XA1, making the camera more comfortable to handle. Sony still uses a fingerprint scanner in the edges, but we do not find this on the Xperia XA1. You will have to choose a password, pincode or pattern to secure your device.

In order to save costs Sony has made purchases from the Chinese MediaTek. That company supplies the processor of the XA1. We are very happy with that because the choice fell on the MediaTek Helio P20. This is a fairly powerful processor that has no less than 8 different cores. It ensures that the Sony XA1 opens apps smoothly and doesn't feel slow. Sony adds its own Smart Cleaner app that cleans unnecessary or unused apps to save space. Fewer unnecessary apps also means that the battery lasts longer. Sony does all its best in this area thanks to the special STAMINA mode that handles the battery efficiently. When the battery is empty in the end, it can be charged extra quickly thanks to the built-in quick charge technology. On top of that, Sony ensures that charging is done in such a way that the battery lasts longer, thanks to Qnovo Adaptive Charging. So even after a year of use, your battery should still be in top condition.

Video about the Sony Xperia XA1

Alternatives of the Sony Xperia XA1