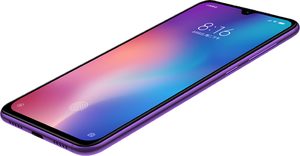 Similar with Mi 9 SE but available

Reviews about the Xiaomi Mi 9 SE

The Xiaomi Mi 9 SE is a handy alternative to the Xiaomi Mi 9. Even though it's cheaper, it shares many of the same features including the same display type, fingerprint scanner and camera. But there are some differences. Which ones and if that still makes it interesting to purchase is something we try to find out.

At the front of the Mi 9 SE we find a 5.97 inch AMOLED screen from Samsung. You wouldn't immediately think you were dealing with a compact device like that. However, because of the ridiculously thin screen edges, it is. The screen-to-case ratio even exceeds 90%, which makes it very high. Because of this, Xiaomi had to place a drop-shaped notch at the top of the screen for the 20 megapixel selfie camera with built-in Beautify mode. Besides a smaller screen, the Xiaomi Mi 9 SE also has a slightly less powerful processor, the still powerful Snapdragon 712, and a slightly smaller battery of 3070 mAh.

Because of its slender appearance, it looks quite modern. Xiaomi has also built in modern features including a fingerprint scanner under the screen glass. Charging is also modern and fast thanks to the included 18 Watt charger. But the most modern is the camera. It consists of three separate sensors, the most important of which is a 48 megapixel one from Sony. It shoots so many pixels that even after zooming in, there is still enough detail left. Still, it is better to use the 8 megapixel camera for zooming in. This camera is equipped with a telephoto lens that brings images up to 2x closer without loss of quality. Finally, there is a third sensor of 13 megapixels that is equipped with a 123° wide-angle lens. This allows you to capture landscapes, large buildings or the horizon. Plenty of choice for all kinds of situations.

Xiaomi is the first to use the Snapdragon 712 processor in a phone. Although it is a bit less powerful than the 855 in the more expensive Mi 9, it still stands his ground. This one is optimized for gaming. More important is that the Xiaomi Mi 9 SE is equipped with a lot of RAM memory so the processor does not have to calculate everything over and over again. If you are considering a copy, it would be a good idea to opt for the model with 128 GB of storage. The price difference with the 64 GB model is only small. What's more, you can't expand the memory yourself by inserting a memory card. So the amount of storage you buy is fixed.

Alternatives of the Xiaomi Mi 9 SE