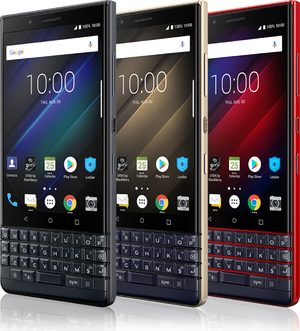 Reviews about the BlackBerry KEY2 LE

The BlackBerry KEY2 LE is the cheaper brother of the KEY2 also announced in 2018. In order to achieve that cheaper price tag BlackBerry has made some concessions, but that doesn't necessarily mean that this KEY2 LE is also a lot less suitable as a work phone.

To start immediately with a disclaimer; it is not BlackBerry that releases this KEY2 LE but TCL Communications. However, from now on we will talk about BlackBerry because it connects its name to the device. In essence, the BlackBerry KEY2 LE looks very much like its big brother, although this should be seen primarily symbolically because not only have the dimensions remained virtually the same, the screen size and screen resolution also remain the same. To get it almost 200 euros cheaper, a slightly smaller battery, a slightly older processor, a little less RAM memory and a little less premium materials were used. So above the entire keyboard there is still a 4.5 inch screen with a resolution of 1620 by 1080 pixels. This is a lot more square than other modern smartphones by the way. Having a QWERTY keyboard goes hand in hand with concessions. By the way, that keyboard is no longer touch sensitive on the KEY2 LE, so you can't use it to move the cursor. However, there is still a fingerprint scanner in the space bar and the buttons have a different shape so you can find them more easily by touch.

Other differences are the slightly less powerful Snapdragon 636, but on paper this is still more than enough for solid use. Hardcore gamers won't be able to use it, but that doesn't fall under the target group either. Also the RAM memory is with 4 GB a bit smaller but is still enough to keep up with the hard worker. On the back we find a double camera of 13 and 5 megapixels. This allows you to take razor-sharp photos of which the background is out of focus. This so-called portrait mode delivers professional-looking photos that can normally only be taken with an expensive SLR camera (a so-called DSLR). However, the KEY2 LE lacks the optical zoom function that the KEY2 did have. Zooming in on the KEY2 LE is done digitally, which is always accompanied by a lower quality.

LE but no lightweight

Clearly, the BlackBerry KEY2 LE is not really a Lite version of the KEY2. Therefore BlackBerry has done the right thing not to call it a KEY2 Lite but to choose for the cryptic LE. There are plenty of other functions that make it suitable for a productive day. Think of the programable hotkey at the bottom right. This allows you to place a shortcut under each button on the keyboard. That makes 52 of them. Open Twitter with the letter T, Facebook with F and LinkedIn with L. Your privacy has also been taken into account. For example, DTEK has been installed that proactively looks at potentially dangerous things with you. Apps that want to take over your microphone, for example. BlackBerry delivers the KEY2 LE standard with Android 8.1 Oreo, with which the Google Assistant can also be used. Updates always come in relatively quickly at BlackBerry, so that's definitely an advantage. Looking for the Dual SIM version? Take a look at the KEY2 LE Dual SIM.

Video about the BlackBerry KEY2 LE

Let BlackBerry explain in 1 minute 37 what you can do with the KEY2 LE.

Alternatives of the BlackBerry KEY2 LE