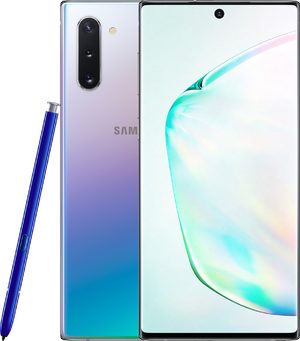 Reviews about the Samsung Galaxy Note 10

The Samsung Galaxy Note 10 in the news

The Samsung Galaxy Note 10 is the compact Note that fans have been asking for. With a size similar to the S10, you now finally have a Galaxy flagship that you can not only control with the S Pen, but also with which you can create content with the S Pen.

Last years Samsung made it easy for itself. It took the last Galaxy S, put an S Pen in it and called it a day. How different is it this year? Not only does this Note 10 have its own head, it is also available in several sizes. And if you, as a loyal Note-fan, think that this Note10 is the true successor to the Note 9, then you are deceived. For that you really have to be at the Note10+. It is the same size. This Galaxy Note 10 is a lot smaller than you are used to from a Note. In terms of size, it even corresponds to the S10. Now some manufacturers want to equip their more compact model with lower specifications, that's not true for the Note 10. This is a full-fledged Note with high-end specifications and powerful performance.

The new look is mainly due to the new location of the self-image camera. No longer tucked away in a corner but neatly aligned in the middle. It is also much smaller, so the screen is less interrupted. It's generous at 6.3 inches. But by using even smaller screen edges, the device itself is not exaggeratedly large. The frame is made of stainless steel and holds the two glass plates firmly together. At the bottom we find the S Pen tucked away, which you can push out as usual. The pen now has its own cheerful colour and can be used to operate the device but also to take notes, as a remote control and, brand new, wirelessly. Built-in motion detection lets you adjust volume, adjust camera angle and swipe photos, new is handwriting recognition and AR Doodles that allow you to create 3D drawings across videos.

On the back we find a triple camera with super wide angle lens, wide-angle lens and telephoto zoom lens. In practice, this means that you can bring images closer without loss of quality. The presence of multiple cameras also allows Note 10 to see depth and add a portrait mode. Pictures with this have a nice blurred background which brings your subject to the foreground. New to the camera is the video mode. It gets many of the same photo features like Live Focus and filters like Blur Filter and Glitch Filter. There's also a zoom microphone. It amplifies the sound of what you're zooming in on; clever!

As mentioned before, this Samsung Galaxy Note10 shares many of the same features as the Note 10+. We think of the processor, for example. But there are differences. For example, this Note 10 does not have the possibility to expand memory. You're stuck with the 256 GB he's equipped with. This is the first time that the memory of a Note model cannot be expanded by itself. If you really need more, you'll have to swerve to the Note 10+. The memory is expandable and a 512 GB version is available. Another thing missing from the Note 10 is a headphone port. This, too, is unique for a Note. Samsung says it did this to increase the battery capacity by 100 mAh. Something always nice but unfortunate.

Alternatives of the Samsung Galaxy Note 10