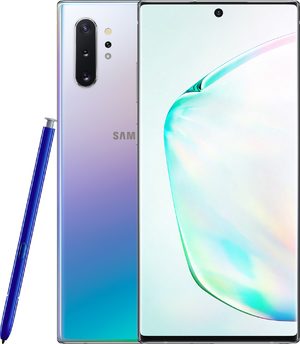 Reviews about the Samsung Galaxy Note 10+

The Samsung Galaxy Note 10+ is Samsung's biggest flagship for 2019. Literally. Because with an immense 6.8-inch screen, it's a real note and the canvas is big enough to let all your creativity flow. And that, too, we mean more literally than figuratively. Exactly how we're going to explain this to you.

The Galaxy Note 10+ (formerly known as the Note 10 Pro but officially attached to each other; Note10+) is a large phablet with pen control. Phablet as in cross between a phone and tablet. Because fair is fair. At 6.8 inches, it's not a little boy. As we're used to from Samsung's Note-series, by the way. New this year is that there is a smaller Note; the regular Note 10. It is no bigger than an S10 and therefore an excellent alternative for those who always thought the Note was a bit too big. Also new this year is that Samsung gives the Note its own identity. Instead of a Galaxy S with S Pen support, the Note 10+ gets its own look and identity. Nothing so a large screen hole in the corner but a small subtle one in the middle that in practice quickly disappears.

As said, this Note 10+ is the true successor to the Note 9 thanks to a large screen with sharp resolution. In contrast to the regular 10, we find a quadruple camera on the back. They are the same three as the 10, but there is also a DepthVision camera here. It can perceive depth even more accurately, which comes in handy with the Live Focus mode where the background is blurred by software. From now on, this function also works in real time in video mode. Anyway, the video camera gets some professional features that we previously only saw with the photo camera. Think of special filters and accurate image stabilization. Also new is the microphone zoom. Zoom in on something while filming and the sound is amplified.

Samsung has also taken care of the S Pen. In the beginning you could only draw with that and operate the device with it, but last year a remote control was added. Take pictures by pressing the button on the S Pen, for example. This year the S Pen recognizes movements and with certain hand gestures you can use it to control your Note10+. The volume, for example, or scroll through your photo album. And in the camera app you can use it to select different lenses.

The Note 10 Plus is a real flagship and that is reflected in its high performance. Samsung chooses the latest of the latest. With 12 GB of RAM, there is never a real lack of working memory. In terms of storage, you can simply add your own ticket to this note. Something not possible with the regular Note 10. There's a headphone port missing, though. You will need to plug in your own favourite headphones via an adapter. Luckily it's in the box. An alternative is to buy a USB-C headphone or go wireless. Now the same port is used for fast charging (up to 45 Watt). If you still want to listen to wired music and charge your Note 10+, you'll have to switch to wireless charging.

Alternatives of the Samsung Galaxy Note 10+