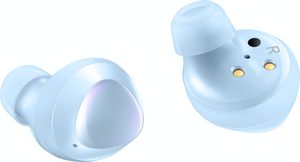 Similar with Galaxy Buds+ but available

Reviews about the Samsung Galaxy Buds+

2 reviews
Give your opinion

Samsung Galaxy Buds+ in the news

Samsung is preparing a radically different successor to the Galaxy Buds. The TWS buds have a completely different look with the shape of a kidney bean.

According to Roland Quandt from Winfuture, the successor to the Galaxy Buds and Buds+ will be much smaller. So small even that they barely leave the outer ear. In appearance, the caps resemble a bean, not strange that Samsung uses the internal code name "Bean".

Functions of Samsung's new earbuds are yet unknown. Possibly there are not many differences with the current Buds family. Thats not the case with its outer shell. The current generation of truly wireless buds often stick out of the ear. Apple in particular started this trend with the well-known rods. At the end of March, Samsung announced in a press release that it was already using a new chipset in the Galaxy Buds+ that's 50% smaller than before. This allowed the buds themselves to be much smaller.

In addition to the new look, the fit will also be different. As current Samsung buds have a silicone ear tip, these new caps are just like Apple's AirPods and sit more loosely in the ear. Because of this they are more vulnerable to ambient noise. It is still unclear when Samsung's new earbuds will come to market. This may happen at the same time as the introduction of the Galaxy Note 20 sometime in the fall.

Looks like we've got press shots coming in from the upcoming Galaxy Buds+. Samsung's wireless earplugs are given a slightly new case and a new colour.

For example, the case differs from the current Buds on a few points and even the caps do not differ that much from the current Buds. The only big difference is the new blue version that is coming. The current Buds are only available in black, white and yellow. We don't seem to be seeing that last one again. It is unclear whether Samsung's latest Buds will get any new features apart from the optical differences. Active noise reduction such as on the Apple AirPods Pro would be welcome, but clarity on this will follow later.

Video's about the Samsung Galaxy Buds+

Roland already has the Samsung Galaxy Buds+ and is kind enough to give us a tour.

Alternatives of the Samsung Galaxy Buds+