What does a new device of just under 150 euros have to offer? That's what we were wondering, and in the case of Samsung you'll get out of the Galaxy J3 (2016) that was released earlier this year.

For that money, the Galaxy J3 (2016) includes a 5-inch Super AMOLED HD display, 8 megapixel camera and quad-core processor at 1.5 GHz with 1.5 GB of working memory. No spectacular specifications, but when it works well, this can be a solid entry-level model.

From aircraft also released in 2016 the LG K8 comes very close to specifications and is even a bit cheaper. On the Windows platform there is the Microsoft Lumia 650. You can of course also look at a device from 2015 that has already dropped in price. Huawei then has the G Play mini on offer and there is the widely acclaimed Motorola Moto G (2015).

The Galaxy J3 (2016) is clearly a Samsung device in many ways. It has the sleeker and less rounded design that has characterised Samsung in recent years. Around the device there is a matte silver rim that is slightly flattened at the sides, as we saw earlier with the Galaxy A-series. We tested the white version of the Galaxy J3 (2016). This one has a matte and slightly pearly backcover. Although it is completely made of plastic, it feels very sturdy and fits comfortably in the hand because of its design. The edges of the aircraft are solid and seem to be able to take a beating as well. 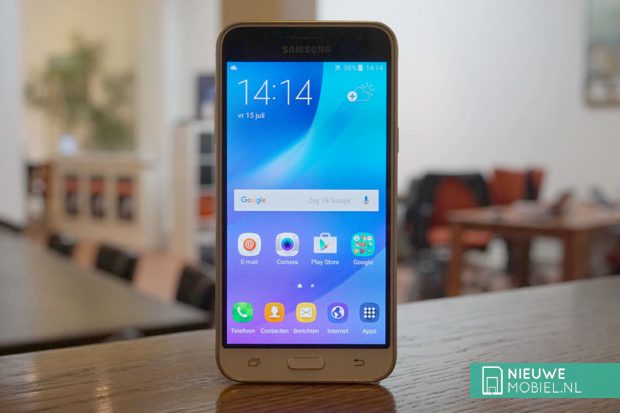 The entire front is covered by a glass plate. However, it is not specifically scratch or drop resistant. There is a black rim around the top of the screen, which extends around the ear loudspeaker, sensors and self-image camera. Below the screen there are three control buttons with the for Samsung standard order of a physical home button in the middle and the touch-sensitive buttons for recent apps and back there respectively left and right. This part is executed in white. Because of this design, when the screen is turned off, it seems as if the J3 (2016) has a significantly larger screen than it actually does. 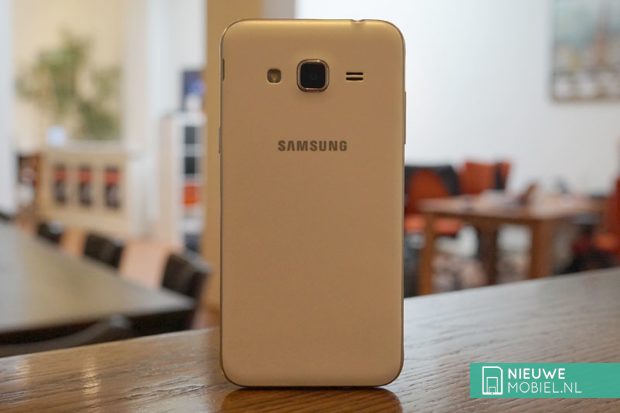 Pearl back
on and off button
8 megapixel camera with flash

As we are used to from Samsung, the power button is on the right side of the device. The volume buttons, on the other hand, are on the left side. The headset connection is on top and the microUSB port on the bottom. At the back, the camera lens protrudes a little bit. Next to it there is an LED flash and the speaker. The backcover can be removed to change the battery. The battery also needs to be removed to insert a SIM card and/or microSD card.

The battery of the J3 (2016) has a capacity of 2,600 mAh. That's quite generous for a device with this size and screen resolution. With a screen on time of 5 hours, we arrived at a usage time of about 36 hours. That is a strong and user-friendly performance. The power-saving mode and extra energy-saving mode are therefore normally not necessary. However, they can extend the battery life a bit more in case of an emergency. 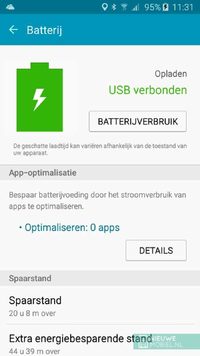 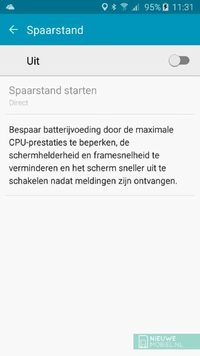 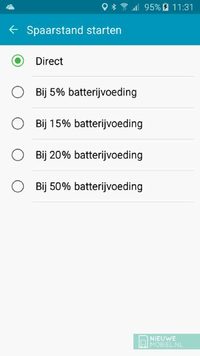 The quadcore processor in the J3 (2016) is not exactly a high-flyer but knows how to hold its own during daily activities. Opening apps and screens takes a bit longer than on a high-end device, but it generally runs smoothly and without any hiccups. Heavy games and intensive multitasking will be more difficult for the device. 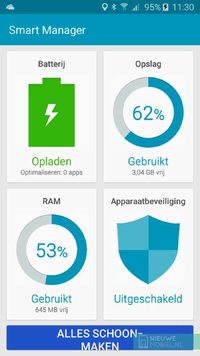 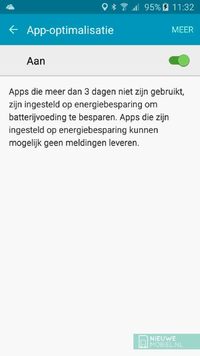 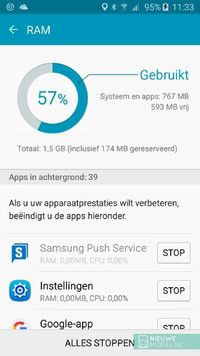 Samsung has also installed a Smart Manager application on the device. This allows battery, storage memory, working memory and device protection to be monitored and optimised. It is convenient to have these four things in one screen. However, we do have our doubts about the manual management of working memory and app optimisation for energy saving, as this can degrade the performance of the device. In addition, the operating system normally ensures correct operation.

The Galaxy J3 (2016) features a Super AMOLED display with a resolution of 720 × 1280 pixels. This brings the pixel density to 294 per inch. As we are used to from AMOLED, the contrast reproduction is very good. Colors look deep and vibrant and the brightness of the screen is excellent. Even in direct sunlight, the screen is still easy to see. Because of the physical buttons underneath the screen, the full 5 inch can be used for displaying the interface. 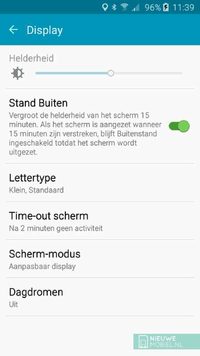 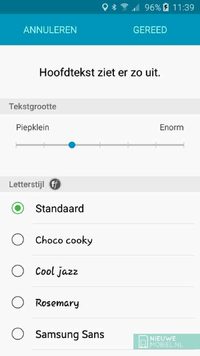 Unlike the competition, the J3 (2016) does not have an ambient light sensor, so screen brightness cannot be adjusted automatically. Instead, you can use the slider in the notification screen. Here is also a box for 'outside' next to it. When ticked, the brightness of the screen is set for 15 minutes even brighter than the maximum brightness. 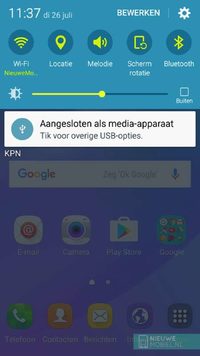 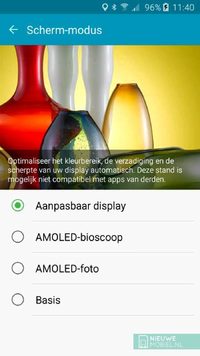 Furthermore, timeout and screen mode can be adjusted. With the latter, four pre-programmed settings can be selected to display colour, saturation and sharpness. In 'adjustable display' mode, the camera does this fully automatically so that images are displayed sharper, richer in colour and with larger viewing angles.

The Galaxy J3 (2016) still runs on Android 5.1.1 and unfortunately not on the newer Android 6.0. The update for the TouchWiz shell we saw on the Galaxy S7 is also not fully present. However, the icons for apps are the same as for the new TouchWiz. If desired, you can download themes and apply them to customize the entire look. Samsung does not have an impeccable reputation when it comes to updating its cheaper devices and despite the fact that Android 6.0 was already out when the J3 (2016) was presented, it is not yet clear whether the device will get the update. Because the year 2016 is included in the name we would be very disappointed if an update to Marshmallow is not available. 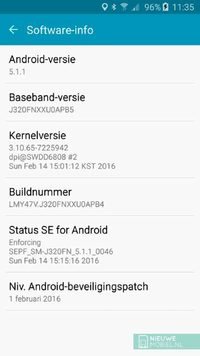 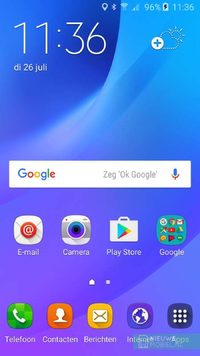 The application menu is just like on the Galaxy S7 rather peculiar. By default, it covers one page where apps from Google, Microsoft and Samsung are grouped into folders. The sorting of the other apps is rather arbitrary. The number of apps installed by default, especially for Samsung terms, is quite remarkable. Although the folder with Microsoft apps should have been left behind. And there are still two apps for e-mail, app store, internet and photos. 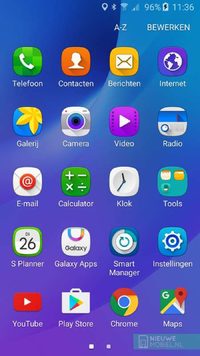 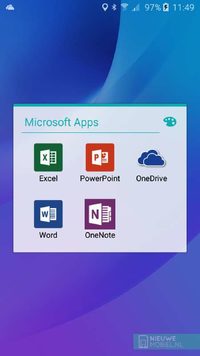 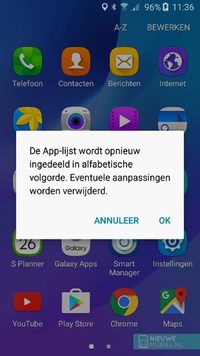 When you remove apps from a folder or install new apps, they are placed at the back of the grid and new pages are created that need to be browsed horizontally. The menu can also be sorted by alphabetical order using a button at the top of the screen. Then you have to save this sorting. Apps in folders are not included. However, newly installed apps are not automatically sorted by alphabet, but are placed at the very end of the menu. Then you have to manually create and save the sorting by alphabet again or put the app itself in the right place. When you remove an app from the device, a hole is created at the end of that page in the menu. Icons from the next page do not connect automatically. Same as on iPhones so not at all compatible with Android. 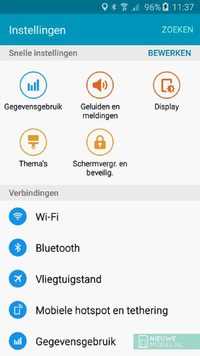 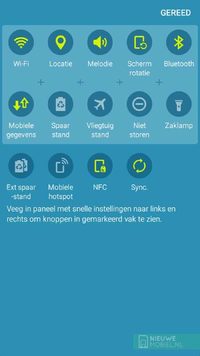 Samsung has tidied up and arranged Android's settings menu. The different items have been split up a bit more and sorted not only by colour, but also by category. This does improve the clarity. Additionally, nine setting options can be pinned to the top of the screen. In the notification screen, the bar at the top with up to ten switches to turn WiFi and sound on or off, for example, is still bright green and blue. You can scroll horizontally through this line and the visible shortcuts can be adjusted by pressing "edit" in the top right corner.

As a budget-friendly device, the J3 (2016) is not equipped with spectacular hardware additions. In fact, this has been cut back considerably. The fact that you have to spend some extra money for a fingerprint scanner is not so strange, but besides the previously mentioned fingerprint scanner and ambient light sensor also a compass is missing. This is for example missing when using Google Maps. Remarkably enough, an NFC chip is present. This enables contactless payment, only that is not yet available in the Netherlands at the time of writing. 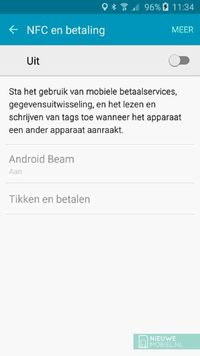 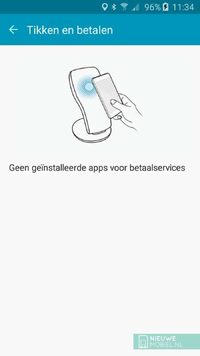 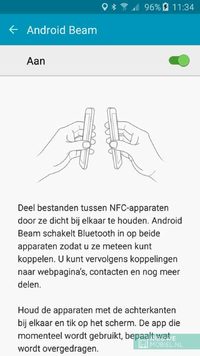 Of the 8 GB of storage memory the J3 (2016) is equipped with, 4.7 GB is available to the user. That's not really generous, so a memory card will come in handy at some point. 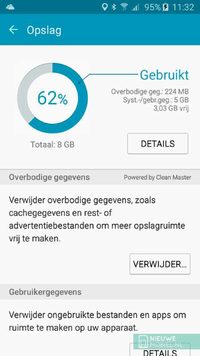 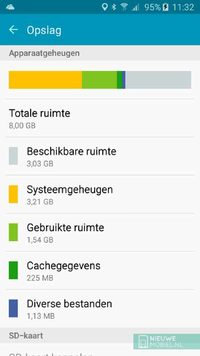 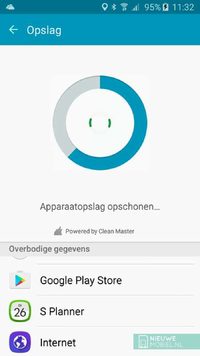 The camera of the J3 (2016) has 8 megapixels. To use all of these, you first need to change the aspect ratio to 4:3. With an aperture of f/2.2, the amount of light that can reach the sensor is not bad, but it can be improved. The camera starts up fairly quickly by pressing the home button twice and the interface is comparable to more expensive Samsung devices. In the search screen, effects, timer and flash can be adjusted. Next to the record button are buttons for the gallery, video, camera switching and photo mode. 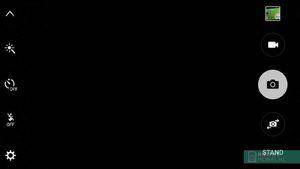 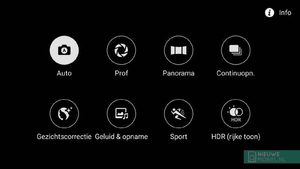 The camera always starts up in automatic mode but you can choose professional, panorama, continuous shooting, face correction, sound & recording, sports and HDR. HDR is also a separate recording mode and unfortunately not an option that you can turn on or off in normal or pro mode. 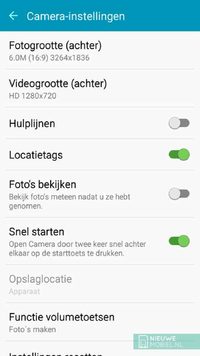 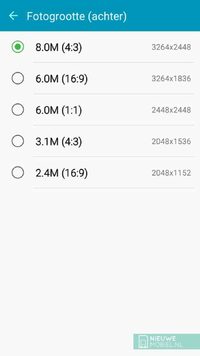 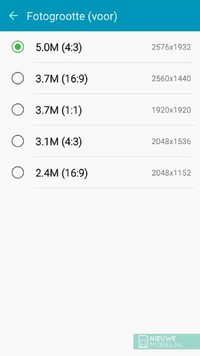 The actual taking of a picture takes a relatively long time. Outdoors and in daylight, the J3 (2016) shoots pretty neat photos. Color rendering is fine and focus works properly. Due to the available number of megapixels, details don't always come out really well. The HDR mode can still achieve a considerable improvement compared to the car mode in case of large exposure differences. The slow shutter speed becomes even more noticeable indoors and in low light. It is especially important to keep the camera steady. Contrast is also less pronounced. The J3 (2016) can record video at maximum HD resolution. At the front is a solid 5 megapixel selfiecam. This has a beauty-function to make yourself look better. So you don't need Photoshop for that.

For 150, you can currently purchase a very nice Samsung device in the form of the Galaxy J3 (2016). The design is up to date and together with the AMOLED display and excellent stamina, this makes it pleasant to use. Of course it is not a speed monster, but it functions properly. The camera can take nice photos from time to time, but it is a bit mediocre and is a bit short compared to a number of competitors that have a 13 megapixel camera.

Unfortunately, the J3 (2016) also comes with a number of shortcomings. These are not necessarily due to its price. The ability to automatically adjust screen brightness is a feature that we take for granted that nowadays you do miss when missing on a device. Of course the outdoor mode is useful on sunny days, but having to manually adjust the screen brightness each time will quickly get boring. The fact that the J3 (2016) has an NFC chip at its disposal is not a good thing for this and we find the added value of this very limited. As far as working and storage memory and Android updates are concerned, we still have our doubts about the future resilience of the device.