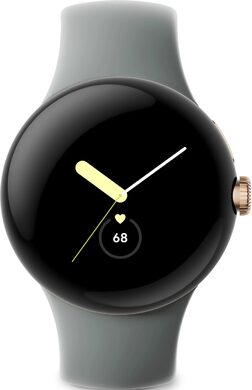 Google Pixel Watch in the news

Google showed the Pixel Watch to the public during the developer event Google I/O. The watch is expected in the Fall of 2022, but Google introduced it today.

The Pixel Watch gets a round glass display with a rotating and haptic crown. Straps are interchangeable and fit seamlessly into the case. With the Pixel Watch, Google is primarily targeting stand-alone operation that does not require a phone to be paired.

The watch has voice control with Google Assistant, Google Maps, and Google Home support. As expected, there is deep integration with Fitbit which means the watch has the necessary fitness features. In addition, the watch runs Wear OS with smoother navigation and smart notifications. And thanks to the new Google Wallet, you can make payments on the go without having your wallet in your pocket.

How much the Google Pixel Watch will cost and which editions are still unknown. Google will undoubtedly reveal more about that when it is officially announced in the fall of 2022.

More and more information is leaking about Google's upcoming Pixel Watch. The watch has even been spotted in the flesh and now specifications are surfacing. About the battery, for example, specifically its capacity.

The round Google Pixel Watch measures 40 by 40 millimeters which is similar in size to the Samsung Galaxy Watch 4. The latter has a 247mAh battery. The Pixel Watch is said to feature a 300mAh battery, according to this rumor. The Samsung's battery life is about 24 hours and it is likely that Google is also aiming for this.

So you'll have to put your Pixel watch on the charger every night. How Google plans to do this is still unclear. A previously surfaced photo showed a special connector but we rather think Google will opt for wireless charging, just like every other smartwatch manufacturer.

Google's watch will share a lot of technology and software with the previously mentioned Galaxy Watch 4. For example, the Google Pixel Watch will most likely use the same Exynos W chipset and also run Google's Wear OS 3 software. It is possible that Google's watch will also include a built-in esim so it does not necessarily need to be connected to a phone. Although this is not unique, Samsung offers such 4G variants of the Watch 4 as well.

Presumably, Google wants to differentiate itself with its tight Fitbit integration. Google recently acquired Fitbit which specializes in fitness features and related hardware. Screenshots of the Google Watch showed the Fitbit logo on the home screen.

It is quite possible that Google will announce the Pixel Watch on May 11, 2022. That's when the Mountain View-based company holds its annual developer conference I/O. Despite the fact that this is often about software, the company also surprises with new hardware from time to time. Thus, the arrival of the Pixel 6a during I/O 2022 is also a possibility.

This story reminds us of the Apple iPhone 4 that was found in a bar before it was announced. Products have to be tested before they are launched and it is best to do this in the real world. The same goes for the Pixel Watch that was allegedly left behind in an American restaurant.

Images of the smart watch surfaced at Android Central. The source does not specify which restaurant or where exactly this Pixel Watch was found. The photos do correspond with previous footage.

We are looking at a round watch with a highly rounded screen and a prominent silver crown on the right. The watch seems to get custom straps. The back is rather rounded and looks to have numerous sensors. In addition to a crown, there appear to be 2 physical control buttons.

The found watch contains a connector that may be used for charging. It is also possible that this is a prototype and that the final Google Pixel Watch will be able to charge completely wirelessly. What software the watch is running we don't know yet; the watch wouldn't boot up. It's possible that it was locked remotely.

Interestingly, the source reports that the watch was found several weeks ago but the owner has not returned to pick up the watch. We know that the found iPhone 4 led to a lawsuit at the time but apparently Google thinks its lost prototype is a little less important.

An image of Google's upcoming Pixel Watch has surfaced. In addition to the date and time, the round clock also displays three icons including that of Fitbit. Fitbit was recently acquired by Google and now seems to be getting a prominent role in Google's upcoming smartwatch.

Stories about the Google Pixel Watch have been going around for years. It would get a round display with a rather prominent silver crown on the right. New images reach us today via 91mobiles thanks to an article by Evan Blass.

In addition to the date and time, we see a pedometer and heart rate monitor but also the Fitbit logo. This suggests that the Pixel Watch comes with tight Fitbit integration. This company, now acquired by Google, makes fitness and activity trackers that have numerous health functions. The latter we will probably find in Google's upcoming watch.

The screen also shows a white dot at the bottom, possibly intended for notifications. It is obvious that the watch will also have in-depth integration with Android and associated smartphones. Google itself, meanwhile, is preparing an announcement. As noted by 9to5Google, Google has now made room on its webshop for watches alongside the already existing phones and smart home category.

Google is rumored to be working on its own Wear OS 3 watch; the Pixel Watch. Thanks to a source, we now have new footage, possibly the official press images. However, we don't learn much new from it.

Round, running under Wear OS 3 and a Q1 2022 launch. All of which we already knew. Thanks in part to the exact same source; Front Page Tech. The official name of the watch will be; the Google Pixel Watch.

Google's own interpretation of the Apple Watch will be round instead of square, has no screen bezels and runs Watch OS 3 which was co-developed with Samsung. Looking at the screenshots, we don't get much more information. All we see is a clock and a map app. What advantage the Pixel Watch has over lets say a Galaxy Watch 4 is therefore not immediately known.

The wait is for the official launch. That may follow in the first quarter of 2022. The same Front Page Tech further reports that rumors of cancelling the Pixel Fold are not true. Therefore, we may see a foldable Pixel phone alongside the unveiling of this watch after all. Who knows.

Video's about the Google Pixel Watch

Google shows off the Pixel Watch up close in this video. We didn't see it this good before

Google shows its Pixel lineup for 2022 that also includes the unreleased Pixel 7, 7 Pro and Pixel Watch

Google is looking for ideas for the design of the Pixel 2. When they watch this video, they are at their beck and call.