Once in a while you'll find a smartphone that puts the entire market on edge. A device with such a good price/quality ratio that you can't really ignore it. The Xiaomi Mi A1 is such a device.

In the West, Xiaomi is an as yet unknown name. The brand doesn't release phones on the European and American market. In China, India and Russia, however, the situation is completely different: Xiaomi joins the big guys like Samsung, Apple and Huawei. The brand has already released several public favorites, which excel in their speed and battery performance.

In the fall of 2017, Xiaomi also started to release devices that can be used worldwide, working on all 4G frequencies in the Netherlands. The Xiaomi Mi A1 is the most Western aircraft of the Chinese brand so far.

The Mi A1 runs under Google's official Android One program, which means that the device has a bare version of Android, without any embellishments or software you don't need. What's more, you can be assured of new Android updates two years after its release in September 2017, and even three years of security updates. So on paper, you can enjoy the Mi A1 at least until 2020. And in terms of specifications, the device has a dual camera, large battery and a bright 5.5-inch screen. But is this also your next smartphone for the next three years?

It's obvious what Xiaomi was looking at when they designed this device. The Xiaomi Mi A1 looks like two drops of water on the iPhone 7/8 Plus. Place them side by side or hold them together, and it's hard to see the differences. They are exactly the same size and almost as thick. They both have a 5.5-inch screen, and both start at the same height. Unlike the most expensive flagship phones of 2017, you still have nice screen edges at the top and bottom. At the bottom, however, Xiaomi incorporates the Android menu buttons. So you can use the full size of the screen. 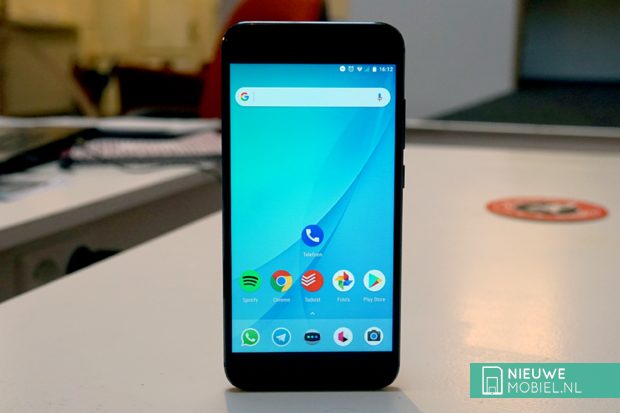 The Mi A1 comes in white and black. The black version we have is beautifully finished. The backside is matt black, which is sensitive to fingerprints but can also be wiped clean. The front shines just like the screen. Both sides are connected by round sides, with a very subtle border along the screen, making it look as if the screen is 'on' the rest of the device with a closed eye. At the back, the phone looks exactly like the iPhone 7 Plus and OnePlus 5, with a dual camera and flash at the top left. In the middle at the back is the fingerprint scanner, at the top and bottom of the back the antenna stripes subtly change colour. The camera looks much more expensive than it is. 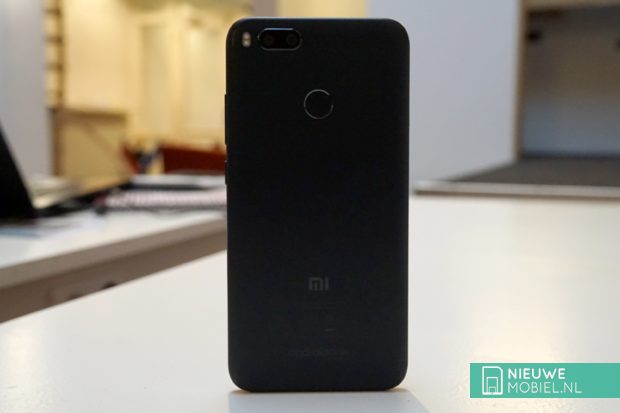 However, the back is quite slippery, and due to its thinness it can be difficult to hold the Mi A1 firmly. Even if your hands are big enough, you'll want to hold it with two hands from time to time to be sure. A cover is no superfluous luxury. This is the biggest disadvantage of the Mi A1.

It is the performance on which the Xiaomi Mi A1 really shines. It has two SIM card slots and lots of built-in storage. In daily use, you can do two days with the battery - and the phone stays fast no matter how many applications you run on it.

The battery of the Mi A1 is 3080 mAh strong, a very large battery by Western standards. This is also noticeable in its performance. In combination with the energy-efficient Snapdragon 625 processor, the battery can be used for two whole days during the test period. And then the device is used intensively: taking photos, watching YouTube, listening to Spotify, Instagrams, apping and tweeting. Five hours of intensive use is feasible. If you want to get even more out of your phone, you can always turn on a battery saver that turns off background processes. That can give you just a few extra hours. Moreover, there is an option to automatically switch your phone off and on again at set times.

The phone does not support fast charging, but in 2.5 hours the phone is full and during a shower your battery can already be ten percent charged. Xiaomi already had a good reputation for battery life and this is another feat.

The nice thing is that the device is not only battery efficient. It is also very fast. The Snapdragon 625 processor is amplified by 4GB of working memory, so you can easily have countless applications open without any delays. The scrolling speed is good, applications start quickly and the camera also starts up quickly. The device also responds directly to your input, both when scrolling and typing.

In terms of storage, the Xiaomi Mi A1 has done an excellent job. The device is equipped with 64GB storage of which you can use 58 gigabyte. But you can also expand it with an SD card of up to 128GB, which you can insert into the second SIM card slot. With this phone, you have the choice to use either two SIM cards at the same time, or one SIM card and extra memory. Just like with the design, you expect to have to deal with such specifications with a much more expensive phone.

The screen of the Mi A1 has a resolution of 1080 x 1920 pixels, which is an excellent choice for this device. You may not have a 4K resolution, but the image is rich in detail and not at all jagged. The brightness could have been slightly higher in bright daylight, but the viewing angles are good and the colors have a lot of depth. It is not a color-explosive AMOLED screen as you see on Samsung devices, but it is more than sufficient.

In the settings you can choose to automatically adjust the brightness of the screen to your environment, options to adjust the heat or blue tones in the screen are missing.

When it comes to software, you have rammed the Xiaomi Mi A1. The phone runs under Google's official Android One program. That means you're at the front of the queue when there are updates with Android, whether it's a completely new version or a security update. The phone comes with Android 7.0. Counting from launch in September 2017, you'll get new versions of Android for two years and security updates for three years. This way, the phone trumps many other cheaper and midrange Android smartphones, whose support often expires after a year because it's an expensive operation for the manufacturer to update the software.

Android One also means you get a bald, fast version of Android without fuss. There's no advertising nonsense like free games, or a debatable virus scanner you won't be waiting for. It's Android as it should be. Yet Xiaomi has stuck to two apps of its own within Android. The first is its own camera app, because Google's standard camera app doesn't support dual cameras.

The second is Mi Remote. The infrared port allows you to control all kinds of devices, from TVs to amplifiers, from the box of your cable TV to audio systems. Xiaomi offers a comprehensive list of supported devices. Your smartphone as a remote control for your devices - a great bonus.

About the hardware most of it is already said on the page design. What's good to add is that the fingerprint scanner is on the back. That has ups and downs. You don't unlock the phone as easily when it's on the table or a desk, but you can unlock it when you grab it from your pocket. In practice, the scanner proves to be reliable and razor-sharp.

Furthermore, the speaker is monotonous, but it sounds nice. The sound via the 3.5 mm audiojack is very clear. Exceptional for this price range.

And now the point where it gets exciting for the Xiaomi Mi A1. Anyone who has seen an advertising video or photo of the device will know that Xiaomi itself compares the camera to the iPhone 7/8 Plus. You can forget about that right away. This device does not offer the same performance as a phone that is four times more expensive. Still, the camera does have muscle. That starts with Xiaomi's camera app, which starts up quickly and operates conveniently. But not everything is cake and egg.

At the front you will find a 5 megapixel selfie camera that shoots photos and videos in nice quality in good light conditions. In less light you will quickly see noise in the picture, but what is perhaps more disturbing is the lack of vivid colors in the pictures. Pictures and videos are a bit brownish.

The main cameras are a different story. The Mi A1 has two 12-megapixel cameras at the back, one with f/2.2, the other with f/2.6. One is for normal shots, the other for zooming in and a bokeh effect. The standard shots you take with them tend to be a bit dark. With the HDR mode on, taking a picture takes a bit longer, but the result is lighter and brighter. Sometimes the effect is too far, which makes the photo look a bit artificial. Unfortunately, the Mi A1 does not (yet) have a mode in which the camera itself chooses between HDR or not. So you will have to switch manually.

Other settings that you always have on screen besides HDR are the flash and the 2x mode. Behind the latter lies the true power of the Mi A1 cameras. The image then zooms in and turns into a portrait mode in which both cameras are used. One focuses on the foreground, the other takes care of the background. The background in the photo is then artificially softened, which can result in beautiful portraits and close-up shots of objects. The software often recognizes the foreground of the background seamlessly. For example, when there is sufficient light, the camera is excellent for portraits you would not expect to be able to take with a phone. Certainly not with such an affordable phone.

Click above for more pictures shot with the Xiaomi Mi A1

On the other hand, photos in low light or with a lot of movement are often out of focus and contain a lot of noise. And that the Xiaomi faces occasionally smooth, because customers in China love it. You can turn off the Beautify filter, but still, faces can look fake in white light. Photos taken with the flash are mostly good.

When filming (which can be done in up to 4K), stabilization is unfortunately lacking. That's why videos often vibrate a bit. The lens also visibly searches for new focus points from time to time.

So the Xiaomi Mi A1's camera won't last unless you take your time and want to take close-ups and portraits in particular. The camera can do great things, but not under all circumstances.

The Xiaomi Mi A1 is a phone that turns the market upside down, or puts it on edge. For around 200 euros you have a smartphone that is capable of doing great things.

The pure version of Android with three years of guaranteed updates, makes this a safe phone for everyone. The device is very fast, has expandable 64GB storage and also goes two days without any problems with a battery! It looks great and expensive, offers great sound from the 3.5 mm audio jack, has a good screen and a camera capable of impressive portraits and close-ups.

All in all, these performances will turn the entire midrange segment of smartphones, from 200 to around 450 euros, upside down in the autumn of 2017. It's not often that you'll find better cameras in this price category than in the Xiaomi Mi A1, and if you do, you'll lose out on other advantages this phone has.