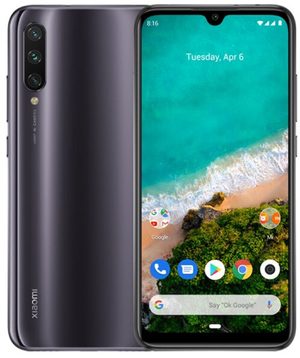 Similar with Mi A3 but available

Reviews about the Xiaomi Mi A3

The Xiaomi Mi A3 is already the third Android One device of the Chinese Xiaomi. Android One offers clear advantages over other Android phones. What exactly and what progress Xiaomi has made with the A3 we would like to explain here.

We know the Xiaomi Mi A devices as inexpensive Android One phones with appealing features. This Mi A3 does not disappoint. On the back, for example, is an AI Triple Camera. That's three cameras of which the highest resolution is a not nauseous 48 megapixel. Now it's not so much about how high that number is, but more about what you do with it. The Sony 48 megapixel sensor uses 4 pixels to create 1 superpixel that is better exposed, has less noise and generally produces sharper and more detailed images. But the real star as far as we are concerned about the triple camera system is the new 8 megapixel camera with 118 degrees wide angle lens. It captures vast landscapes in a single shot. The third camera is mainly for recognizing depth and enables background blur.

This Mi A3 also has some interesting improvements over its predecessor; the A2. For example, the battery capacity has increased by more than 1000 mAh. With a screen size that has remained almost the same, the A3 will last much longer than its predecessor. There is support for fast charging of up to 18 Watt. Xiaomi delivers a quick charger in the box, but that goes up to 10 watts. So if you want to charge even faster on the road, you have to buy an 18 watt fast charger separately. The Mi A3 also has an old acquaintance: the headphone port. To Xiaomi's great dissatisfaction Xiaomi removed it on the A2 but reintroduced it on the A3. So you can plug in your own favorite headphones again. Infrared is also back so you can use it as a TV remote control.

New screen with pros and cons

The screen on the Mi A3 is one of his biggest eye-catchers. Just like the A2 Lite, it has a notch for the selfie camera. That allows Xiaomi to get it tight against the edge. What's more, it just looks modern. The fingerprint scanner is also incorporated in that screen. Although modern, it's not as fast as a physical fingerprint scanner. What's more, Xiaomi has remarkably reduced screen resolution from Full HD+ to HD+. This is still sharp enough for most people, but the trained eye will notice it. This is made up for us by swapping the LTPS panel for an AMOLED copy. AMOLED delivers clear images with very high contrast values. That's how black really is black. Also the readability outside is improved.

Most important Xiaomi Mi A3 specifications

All Xiaomi Mi A3 specifications

Video's about the Xiaomi Mi A3

Always wanted to know what your Xiaomi Mi A3 looks like on the inside? Don't let it break but watch this video if you really want to know

Xiaomi introduces the Mi A3; a worthy successor with three cameras, a modern screen and a colorful jacket.

A Xiaomi Mi A3 you buy next to Android One of course because of his camera. What this 48 megapixel beast is capable of you can see here

Alternatives of the Xiaomi Mi A3